I am not going to work tomorrow, I have a chance to sleep in, eat well, work through a head cold, & get creative! Any ideas, let me know.

I will certainly be at the Wor Diary launch & flog it round local gigs;
I will try to get out visiting bothies & sketching as I go;
I will be thoughtful about family & christmas presents;
I will work from a 'free to do' perspective instead of the usual 'this is expected' one;
I will fill an arthousecoop sketchbook & send it to their exhibition;
I will read the saturday paper & several books!
I will live cheaply, travel a little, visit ... 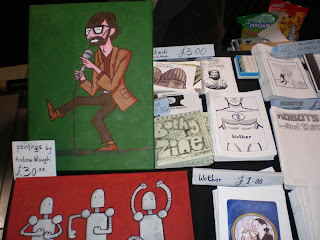 (pic of paper jam stall at the thought bubble convention, with a couple of mine in there)
Posted by Michael Duckett at 10:39 No comments:

Wor Diary 2010 is printed and somewhere in Newcastle (probably the sorting office..)

So the launch is on 1st December where the entry price is the cost price of a diary - which you then receive! Music and nonsense and quizzes and stuff. Star & Shadow Cinema, 7pm.

www.wordiary.org
Posted by Michael Duckett at 12:56 No comments:

Thoughts for a Christmas Zine

9.11.09
November's threefold ceremonies of death have declared our ritual goodbyes to summer. Winter is arriving and soon it will be time to celebrate it. Town is getting busier at night - and bloody scary. Each small local gig feels snug and warm, a cave of drink and music in which, in little clusters of friendly strangers, we can shut out the cold black sky. Some of us will play guitar and share some songs. Others will drink, in honour of king winter.

On the no.12 bus, I see an Asian lady sitting with her legs against the heater, in an almost empty fabric shop. Each of my neighbours has the TV on, babbling in warm and golden moving colours - our substitute 21st century fires. Entering the house, I turn on the heating and the radiators clink and gurgle, in their own time and to their own tune. I put my legs under the duvet and write as I wait for the air to warm up.

I am looking forward to winter, and I decide that I will write a zine to celebrate it. If all goes well, then in your hands you will be holding it. I hope you're enjoying the Tyneside chill.

In the first ritual, we hid indoors or decorated our faces. We sent the children out in disguise, to knock on neighbours' doors and beg for sugar. The night is early, and we make sure they come in soon. The outdoors is carefully watched, a safe contained circuit of our closest streets. No woodland, no mountainside. We are not ready yet. Fire is contained in an orange pumpkin. I serve beer at a horror movie double-bill, a little dose of scared, in 1 1/2 hour doses. Moors and old houses on the screen, but nice red seats to back into, and friends whooping at the film. We take a taxi home.

In the second ritual fire is needed, to purify and scarify the detritus of summer leaves, of windfall branches blown in with winter's step. But this year it was just fireworks through the window for me. No Saltwell Park, no Samhain dance. All hail to the Fenham hippies, though ,who did their fire dance in Nuns Moor and in Elswick. Human fireworks, pagan movement, outdoors festival in the breathy black night. We stayed out a little longer this time.

The third ritual is the most solemn. The funereal march, the great vampires and good zombies wearing black. Guns saluting the fallen and the red hold of the poppy. A minute of silence - not the silence of the tomb, but the silence of a collective remembering. Like spores under the soil. Shared, and in sharing, we hear each others hearts, and our own hearts beat stronger.
Every representative of church and state, the war machine and long-lost colonies, are wearing black in London. The public ritual of ordered movement, filing into lines, into squares and facing the faceless monument. Names of dead squaddies scrolling down the screen, another unnamed one killed that morning. Every dead son. Missing father. Absent generation. Possibilities gone. We all are marching into the black, and today even the toffs remember it. There is a power in public ritual and in this third ritual of November, the full gravity and grieving of winter is remembered. This is the end, we have slipped into the realm of dark night.

And winter is here.

Hello winter.
Posted by Michael Duckett at 09:34 No comments:

1. Space Monkey
I put a piece into 'Space Monkey', the latest anthology from the paper jam comics collective, (and the only one suitable for kids!) Available from Travelling Man Newcastle for a bargain £3, definitely the best anthology they(we)'ve done yet, all glossy colour and careful formatting and stuff. And jokes! Not sure if there's a launch event for it yet, but I hope so.
http://papercomicjams.blogspot.com

2. Wor Diary 2010
I spent half of my half-term cutting and sticking Wor Diary 2010 together. (A quarter term?) So it's now with the printers down in Yorkshire and will be launched on Tuesday the sumthink of November (will confirm). Again, possibly the best one we've done yet.

All done by amateurs, all open - I'm especially happy that I don't know all the people who drew pages for it this year. It's progressed from a 'me and Joe and mates' affair in 2008 to a 'people who enjoyed it and their friends' in 2009 to an 'even strangers are involved this year' dooby in 2010.

Will be available (for anti-profit cost-price) in 2 weeks time from me in the post, from Travelling Man Newcastle's Small Press section, Roots Music, and assorted independent gigs and DIY events in the toon.
http://www.wordiary.org

3. The Sketchbook Project.
A nice-sounding America-based thing where you send em a tenner, receive a sketchpad in the post, fill it up and send it back. They then trail it and a thousand other random strangers' sketchpads around different exhibitions. I haven't started on mine yet - I think I'll wait till I know if Im off work in december, and then if I am, I'll use it for a holiday/travelling sketchpad. Maybe a bothyzine 2! The deadline to get the full sketchpads back has been put back to January so you have time to join in too.
http://www.arthousecoop.com

4. Lomo photos.
Just a wee exhibition at the Trent House coming up, but it says anyone's welcome to send in pictures so I'll stick a film in my lomo camera some weekend and see if any of them come out well. Ooh I've just checked the website and it's this weekend, so I guess that's 'stick a film in my camera some day this week', which will mean night shots cos I'm back at work for all the daylight hours. Well, we'll see.
http://www.pranceydog.co.uk
Posted by Michael Duckett at 10:53 No comments: 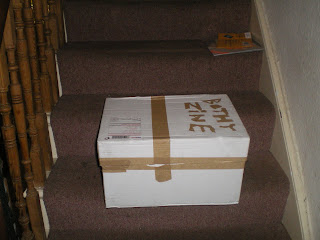 I've just put loads of bothy zines into envelopes to post off to 'officers' (volunteers) in the mountain bothy association. They haven't really asked for them or anything, but I found it REALLY satisfying to send them off, coz it's the kind of thing I would love to get.

I also got a strange satisfaction from their addresses, in Shap, Oban, really scottish sounding cottages, one guy just round the corner, another near where I work. It gives me a sense of connecting to this grounded geography, this network of real people, community I guess. Anyway, if you want a zine, send an SAE to the usual address ( on my v.first blog post). 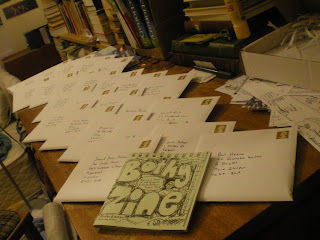 Posted by Michael Duckett at 09:59 No comments: