not sure how to fully delete a boring post...


Posted by Michael Duckett at 11:03 No comments:

I'm going to go to Fenham library in a bit, where I'll probably queue for a while in order to use a scanner and printer. I'll be waiting for a thick and ugly boy on myspace, who squints up close at the screen to try and see as much flesh as possible on girls' profile pics.

I saw that advert for the £49.99 printer/scanner yesterday and had a think about getting it. It would make all this so much easier. I could scan when I like, without having to borrow,wait or limit how much I do. By leisurely re-doing and experimenting, I could become an 'expert' at using a small piece of domestic kit - an artisan of home-printing!

But I've always resisted getting my own private tools. I spend too much time alone already. And when you go to the library/wait for the bus/walk and walk to get what you want, then you do encounter other people in the real world. Including the ugly boy, and the library staff who totally fucked up the photocopier when it had an ink jam. At least the boy is doing his squinting in public. Being forced into the open reveals and reminds us what each other are like, ugly and all. I think that's a good thing.

Almost all of my zines have been done on public photocopiers. I've not even scanned any of them and I've never really got the 'hang' of any particular machine. This is why they're never neatly done, or of the same standard. The worst printed are the ones done cheapest, ones that I used to do on a duplicator in Gateshead, where I had to hide what it was I was printing from the other users of the building. I liked that experience of secrecy in public.

But the printing does suffer, and it takes so much time, and it used to add on about £5 to the printing just to get to Gateshead (metro and irn bru), and it often adds another day or two onto the making and finishing of things. It also makes you feel stupid and frustrated to spend your time going back and forth, not being able to do something then and there. There's an aspect of society pressure, too. Standing at a bus stop, I think of Maggie Thatcher's quote: 'if you see a man over the age of 30 at a bus stop, you know he's a loser'. Now I'm a little older, I tend to feel shitter about myself when I compare myself, (in these acts of doing pointless, unintelligent errands and repetitive, unnecessarily awkward tasks that end up coming out really bad) with some flash harry in his office and paid-up mac software doing it in a tenth of the time.

I don't even have microsoft office on this computer, and the laptop itself broke one week after its guarantee ran out. And things I do on it are incompatible with the systems at work.
Why do I make life so hard for myself?
The same reason I don't buy a car, and spend more money and more time gettting places on public transport?
I used to feel more confident in that decision, but lately I have just felt tired, and like I'm wasting effort. WHY have I never learnt how to use a software programme? WHY have I not, by this age, accumulated some useful tools?

Not having a car, I get a bus to get close to a place of beauty. I walk a few miles to get there, and it's raining. The route is not so beautiful, and there are cars passing me. By the time I get there, I am fed up and my feet hurt. A girl gets out of the back seat of her daddy's car and sucks on a can of pop. I hate her. But it's my own fault.
Posted by Michael Duckett at 03:03 No comments:

My Tour of the English Bothies (zine) has begun!

This week I visited the two most out-lying and far-flung English bothies and wrote & sketched loads, which I'm generally happy with.
(click on a picture to read my burbles...) 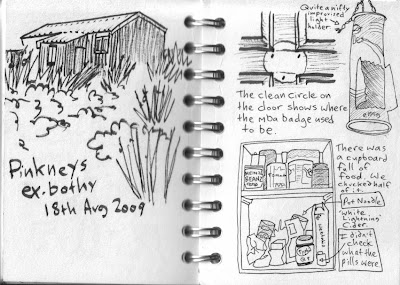 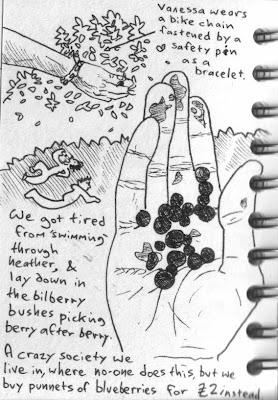 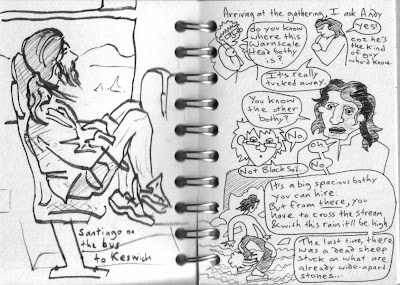 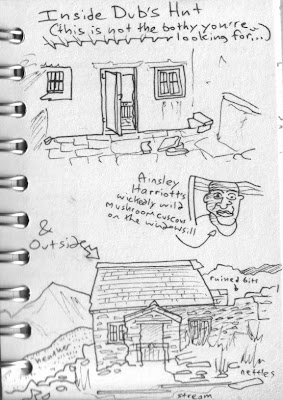 And tomorrow I am setting off on the 6-day walk between the bothies of the Kielder kingdom, with nothing but my thoughts and a small radio (which may or may not have reception) for company.

Talk when I'm back from the darkest spot in England...
Posted by Michael Duckett at 14:19 3 comments: 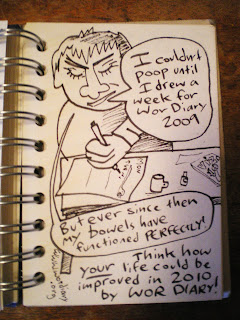 Wor Diary involves forgotten and subversive dates from Newcastle's underground history.
It involves hand-drawing the week-per-view pages with doodles and your own personality.
It involves a deadline in September for anyone like yourself who would like to contribute.
It involves a pub quiz style launch at the star & shadow in November. 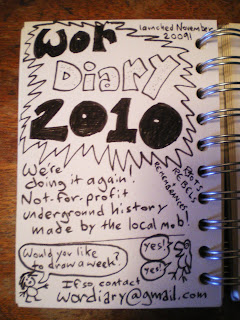 www.wordiary.org
Posted by Michael Duckett at 12:26 No comments: 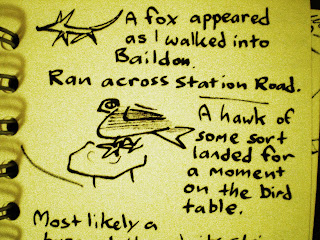 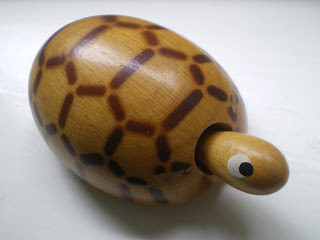 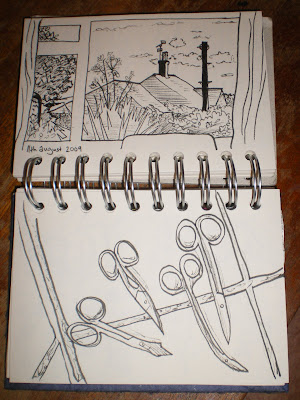 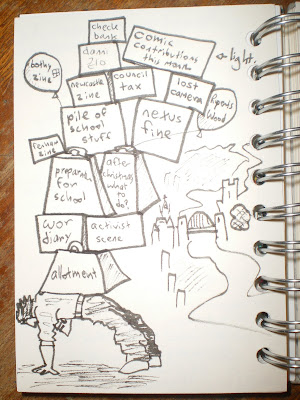 I realised I really can't draw women so will try copying some standard comic images (not hourglass & boobs, but not square plus legs either).
My plan is to take photos on the street, print them on paper, then draw over the street figures in black, then in white, to see what actual genuine geordie people look like. Not detailed, just enough for 1cm background-figures.

I also wrote enough for a mini zine on Roman philosophers, which I'll copy next week. 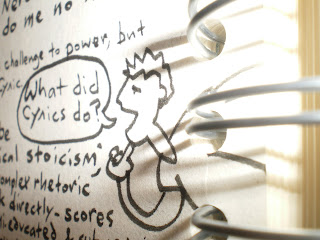 Today I had a nice time* at the Paper Jam Comics meeting, & I started drawing my ideas for the comic I dream of making in 2010. Or at least doodling with one of Spence's rants:

A WORM PAYS NO RENT! 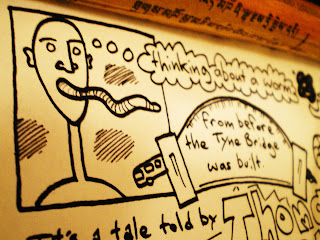 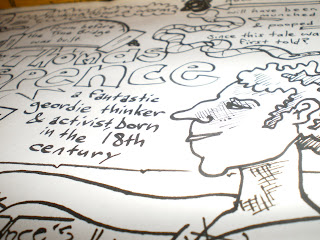 Here are ingredients i may include (I won't fully explain right now, but I dream of spending 3 months hand-making a comic about Spence, me, Newcastle, etc...):

It's the first bit I will try get done this Summer - the rest will have to wait until after Christmas, I think, which is good cos I'll know if my enthusiasm is still with me - in which case I know it's worth committing to! 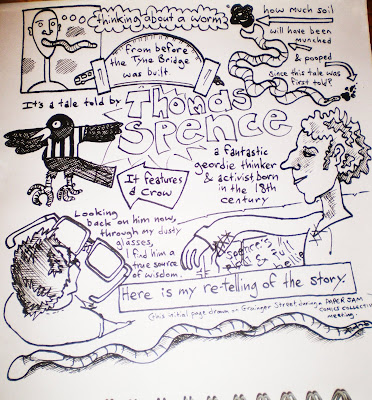 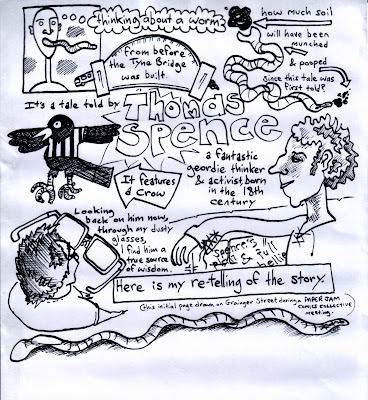 Other than that, I have spent over £80 on comics in the last week, which is sickening and bourgeois, but wonderful. In no particular order I salute Anders Nilsen, Daniel B, Dave Hughes, Yoshihiro Tatsumi, Christophe Blain, Marco Corrona, Boulet, Aude Picault, Mandragore...
The impact on my brain is like to this computer interfacing superior alien technology...

But a word of advice: never read 'Deogratias: A tale of Rwanda' before going to sleep. I literally lay there in a state of horror afterwards, unable to close off what the comic told me. I had to read other stuff to try and occlude it.


*by 'nice time' I mean: for the first time this summer I have spent life as was once envisaged in future communist utopia.
In the morning I read about the neolithic alignments of carnac.
In the afternoon I worked with Marian on the allotment, making clearings in the jungle and gorging on purple gooseberries.
In the evening I walked into town and drew comics with some good people.
Posted by Michael Duckett at 14:29 No comments: