Today I am starting a zine about zines. A local zine, about LOCAL zines.

And today, I have FINISHED ' Tyneside Zine Review 2009 ' (& already heard of one zine I missed out, about charity shopping), & will give it out at the Star & Shadow tonight (29th May) for the 'Robots --- and that' launch by the esteemed PAPER JAM COMICS COLLECTIVE. 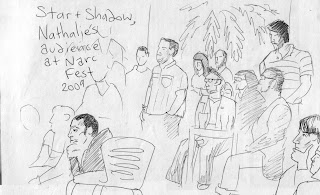 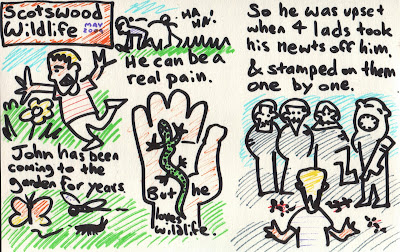 Posted by Michael Duckett at 07:53 No comments: 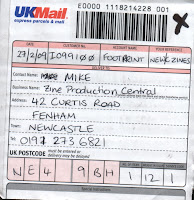 I was giving out zines at the 'Defiance Ohio' gig in Durham yesterday, and was really pleased when people said 'ooh I have that one already but I'll take that one' etc.. It seems people really do go to the star & shadow from all over the North East & I am feeling really optimistic that we have a pretty thriving zine & DIY culture up here.
Microcosm Publishing had a stall and there were lots of zines etc.. for sale from America. Strange place Durham, though (the Pink Panther's favourite city). Posh student enclaves around the Cathedral making it feel all quiet and medieval. And I walked right past the venue and back onto the river. I figured if I didn't find it then I would just kip in the woods there - it was warm enough to imagine it. As it was, the gig was found and packed and afterwards there were 10 of us on the platform waiting for the delayed train back to Newcastle, with mandolins and singing and flutes and harmonica and drunk couples clapping & dancing to the tunes. 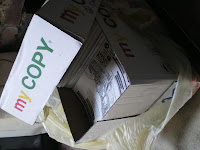 I went up into my loft before the gig to dig out the last box of my 'Secret History Zine', and I'm down to my last few of all but the 'Abraham' zine. A space is appearing, to fill...

Today I've been reading my latest local small press comics and I'll do a review of some of them this week. & don't forget this Friday the anthology launch at the star & shadow...

Text of a Flyer I handed out at the weekend:

Let’s Make Zines Together in Newcastle!

Paper Jam Comics-Drawing Collective Launch Their Latest Anthology on Friday 27th May at the Star & Shadow, and draw together every two weeks at the Travelling Man Comics Shop on Clayton St.
http://paperjamcomicscollective.blogspot.com

There’s too many band and collectives putting out songs, putting on gigs & making craft to mention here. (one I haven’t met yet is at myspace.com/dearapplejack)
But did you know there are some people learning how to bind their own notebooks this Sunday in Fenham?

It’s one of the offshoots of the DIY-Aye! Festival that took place last weekend (again in the TOTALLY volunteer-run & DIY Star & Shadow Cinema). Maybe you were there. What shall we do next? Learn Greek by interpreting anarchist graffiti? Learn Religion by reading only the expurgated bits of the Bible? Write a collective story? Start a cartoon & pass it on & on around the Toon until it’s 5000 pages long? Start a shared newsletter or blog for DIY zine-related things?
Let me know,
I am Mike at HTTP://ZINE-IT-YOURSELF.BLOGSPOT.COM

And I would love to swap zines or postcards if you send them to:
42 Curtis Rd
Fenham
NE4 9BH
Posted by Michael Duckett at 06:56 1 comment:

I work as a teacher now, and I collect the little pictures that get drawn of me by bored pupils. I'm starting to encourage pupils to draw me, or to add graffiti pictures of me on hand-outs. Here are some of the early contributions. I'll turn it into a zine at the end of term. 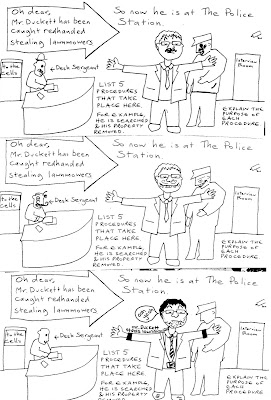 I seem to mostly get 'Mr.Duckett smells' contributions. But I also get others like these. 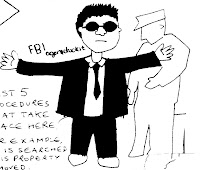 And one or two boys are actively giving me portraits now. All done when they should be working on the tasks I set them! 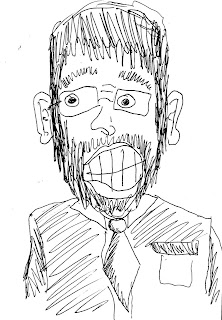 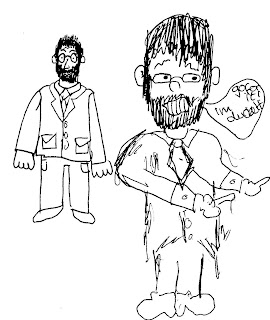 Posted by Michael Duckett at 06:46 No comments: 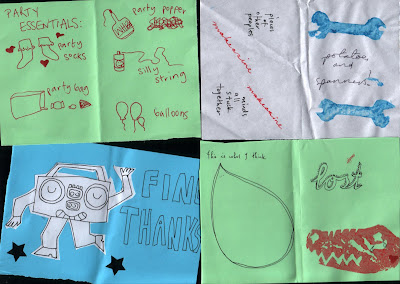 Well DIY Aye! has been and gone, and it was lovely.

My favourite moments include:
- Keith's embarrassed face as he announced "the dildo-making workshop is starting now in the office"
- looking around the bar and seeing three different huddles of people, heads down and intent on their craft - knitting, book-binding and patch-making - while others just chatted & plotted around them, and outside in the hallway there were couples practising self-protection, and a big ring of people banging pots and odd instruments in a collective jam
- being sad when my attempted stencil went wet too quick, but then having a flash of inspiration when the experimental dark-room techniques was announced - and returning proud and beaming with the developed images to contribute back into the manual zine pool!

The manual zine went really well with potato prints and stamps and holes made in things and glued back onto each other and some fine little drawings and a 2-year old's handprint and someone cutting up the story they wrote and we made 12 good little zines without a photocopier.

But things always take longer than expected and the more innovative techniques didn't quite get going - and I got tired and hungry after our first session.

When i re-opened the session later I realised that people who'd contributed pages in the first workshop had since moved on, and there were now more than 12 people involved which means if everyone still kept to the plan of 'make 12 copies of your page and then everyone will get a copy' then some people wouldn't get a booklet. Eek. So next time I definitely need to get people's names and contacts so I can pass on the zine if they aren't still around when it's finished. In the end it all worked out well with more than 12 made, and just a little diversity in how thick with pages they were. I have 5 left unclaimed, but I think I know a gig in Durham where two of the original contributors will be so I'll try get them along to them there.

After my darkroom stencils had dried I wasn't sure how best to bind them so I made origami envelopes to put the pages in. Even this turned into an impromptu workshop - if you want to know how to make origami envelopes just ask us! I haven't opened my own copy of the zine up again yet but when I do I'll scan a few images in here to show what we achieved - basically lots of colour & nice shapes but no plot and no photocopying!

Yay! The Liberation of Zines from Photocopiers has begun!
Posted by Michael Duckett at 12:57 1 comment: