There's a fair & critical review of the bothy zine at the excellent "365 zines a year" blog. It's not the only disordered & scrappy zine I've made, either (sex zine, spring zine, to a lesser degree exam zine & newcastle zine review - actually wor diary sometimes too), but for me it was all about the getting it out and done in time before i started work in september. I will no doubt fail to rewrite and redo more zines cos i always do em fast and scrappy and alive. Random offerings to strangers in the here & now.

But I already had the aim of getting my next zines - the new york and the anarchsit pilgrimage zine travelogue things - more readable and spaced out and ordered so it was good to read a third person saying it would help me communicate!

4 entries for the present for elodie already in, still waiting for the central european languages!
Posted by Michael Duckett at 12:37 3 comments:

A Present for Elodie

Elodie was a girl who lived in newcastle and made a zine called applejack. I don't think I ever met her, but one thing about the zine that I thought was fantastic was that it was mostly in French, reviewing local bands etc.. in a language that most local people couldn't read. Genius! Plus the zine was very nicely craftily made with flowers and much talk of love.

She's since left town, and I thought it might be a really nice gift out of the blue to post her a zine inspired by applejack, in that everything's written in a different language, so I'm asking everyone to write a v.short piece (50 or 60 words is totally enough) about anything to do with newcastle, local music, the mood you're in today, what you can see out the window - anything! If possible, write it by hand (cos her zine was mostly handwritten, I think), and in lines no longer than you could fit on a postcard. If you don't have a title for your bit, then feel free to write 'a present for Elodie' in your chosen language.

I plan to stick everything onto an A4 sheet that can then fold out. Print 100 copies and leave them around town.

And on the very night I was enthusing about this idea to most of you, I learnt from Luke that the actual real person Elodie is returning on a visit to Newcastle this Thursday. Serendipity in action! So there's your deadline - something about anything written by Thursday, then I'll try collect them off people and photocopy them Saturday morning to distro and give to her on Saturday night.

Languages so far include French, German, Spanish, Italian, Czech, Polish, Greek & Finnish. If you would like to contribute something, email me at the usual - sorry for the tight deadline but there's no point loitering when spring's on it's way.

"A present for Elodie" is out and has found its way into Elodie's hands - she was spotted at the Withered Hand/O'Messy Life gig at the Morden Tower, and so I included pics of that gig in the final mini-zine, which I very happily gave and met her at the Cumberland the next night, for Chronicity/Shin Jin Rui on the 31st Jan.

Yay! Even my girlfriend had a moment of jealousy, and it's the first zine for which I've used space stickers!

Posted by Michael Duckett at 07:51 No comments: 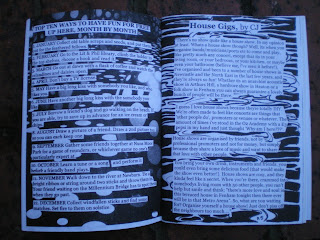 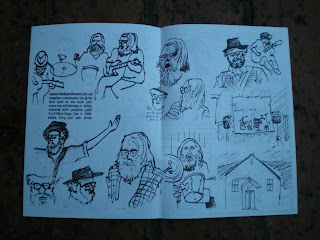 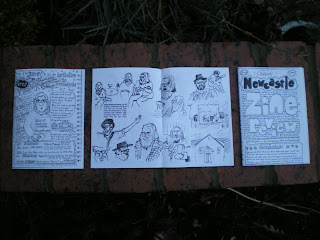 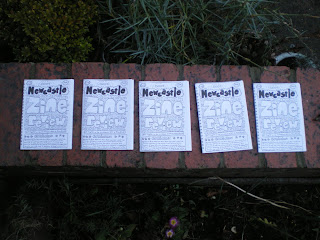 The Newcastle Zine Review is trying to be delivered to me - 300 freebies to cast out around toon.
{since arrived, and I've left stacks in travelling man, the head of steam, the star & shadow, the tanners arms, the ship, the cluny, the cumberland, the free trade & the tyne}

There is a Star & Shadow volunteers zine being coordinated by Debbie
{deadline now passed & I was amazed how MUCH stuff was contributed, plus it touched me to read people enthuse about this place that I also love, so much I got a wet eye!}

There is an Arthurs Hill poetry zine being coordinated by Bethan & people.
{I've just written a first attempt at my contribution, about my old beloved house}

Plus I've agreed to do a zine trail as part of the P.R.E.S.S. events at the Washington Arts Centre (and will no doubt haunt the 24hour comic thing at the Tyneside in March).

Also plus I've proposed a regular craftycreative slot at the Star & Shadow once a month
{waiting for responses from other volunteers.}

And here are a few pics from the hybrid zine we already made this year in the star & shadow, in the far corner of the room from where the Wobblies were meeting last saturday. 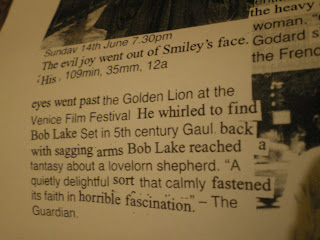 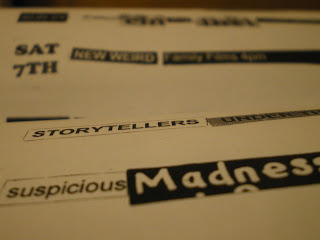 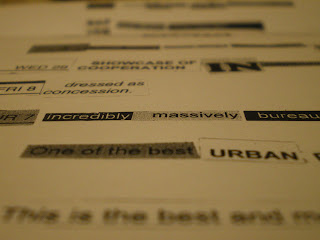 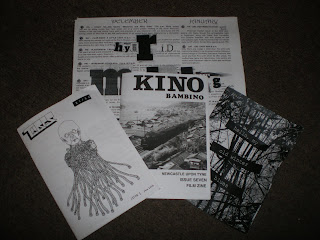 Here are 4 local zines that have been made already this year, since the zine review went to print.

Turps is great, from N.Shields in a run of 50 & found in the Star & Shadow. A collaborative effort of varying tone & quality, but I really liked some bits. I was also v.happy in my tour of the toon, dropping off zines, to discover the Turps people had got there ahead of me much of the time. Yay, we zinesters are not alone!
Hello my old winter blues is a CJ one, probably from just before crimbo. He's also just done one about the police. He must be after the award for 'most prolific zinester of 2010, after I placed him at a lowly 3rd for 2009, heh heh!
I'm about to read the latest kino bambino on the bus to see the vivian girls at the cluny.
The Hybrid A3 poster/zine effort was done by me, Laura, Mark, Tamzin & Selma, & I think some of us found it quite hard work.
Posted by Michael Duckett at 10:11 No comments:

As advertised on the Star & Shadow website:
Saturday 16th January

We will splice together the Star & shadow with some other things, using scissors and prittstick. All welcome - bring a page of your favourite novel/going for growth report/trashy celeb magazine, cut out the words and mix them up with ones from star & shadow programmes. Let's see what hybrid monsters we can create with a bit of cutting-up and sticking-back-together! Bring a bite to eat. Raunchy words welcome.

So anyone's welcome, it's free, informal, and if they turn out interesting-looking we could turn them into a mini-exhibition in the foyer. Glue and scissors provided!

And a couple of recent contributions from zines to the world beyond: 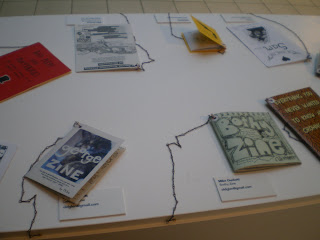 3 of mine amongst the zines at the Sunderland Winter Museum's 'Collected Fragments' exhibition - thankyou Natalie! 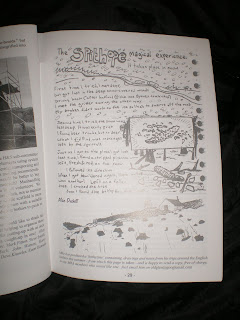 Page from my bothy zine in the latest 'Bothy Notes'.
Posted by Michael Duckett at 08:33 1 comment: 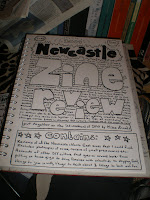 Okay, the snow has cancelled work for me, so I've been able to get on and cut n paste the zine review together. Should be ready to post to the printers tomorrow.

I did have lots of content posted up here but I've deleted it now to clean up cyberspace!

Contents of the DIY events section:

Posted by Michael Duckett at 07:07 No comments:

It's called my Anarchist Pilgrimage and its a holiday, a zine, a massive project and a dream to hold onto until I finish work in July. It'll cost over £2000.

I'll say nothing more about it here, because I have other holidays, zines and projects to do first.
Posted by Michael Duckett at 06:40 No comments: