I've been drawing a little less than usual, but still regularly. Here are some from the start of the year. 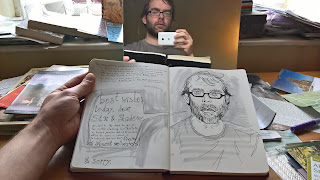 I couldn't afford to join the Star & Shadow volunteers one day so indulged myself with a self-portrait apology. The fact they have volunteer days pretty much EVERY day makes my excuse rather weak. 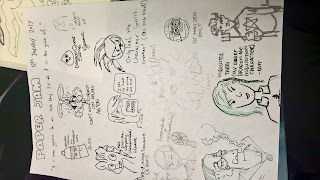 The Paper Jam Comics Collective continue to tolerate my occasional presence in their ranks. This is our sign-in sheet : a different theme each week, for us to draw ourselves into. For some reason I found the idea of someone having toast stuck flat-side-round in their mouth completely hilarious that night. 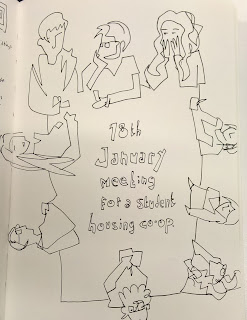 Some great young people are trying to make an ambitious idea happen. I have little to offer but supportive hand waving from the corner. 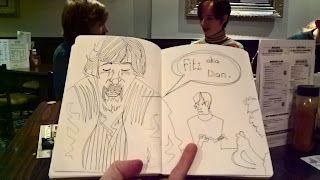 Pubjam, the every-second-meeting that takes place in the pub, with young and older comics enthusiasts together. I am now in the latter group. 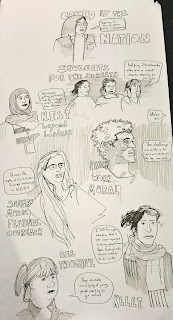 I drew some presenters as they told the room about their new projects. As portraits, these look nothing like the people involved, but as a thing to do during the presentations, it was spot on. 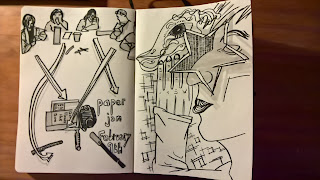 Paper Jam again - that makes it three meetings in a row, almost a personal record. 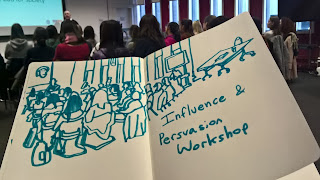 Another work thing : I was in the room in case the break-out groups needed someone to prompt and keep them on track. But the person I was covering for returned from her mission and I was relieved straight after doodling the room. 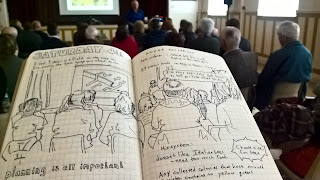 Tyneside Beekeepers Association : I joined some student bee fans at this event in Gateshead, helping cars park and serving tea and biscuits as needed. And I learnt a lot about raising bees. 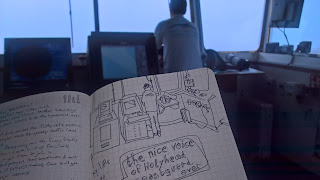 Onto the Stena Line ferry to Belfast, surveying for dolphins and other such creatures. This was our position on the bridge. 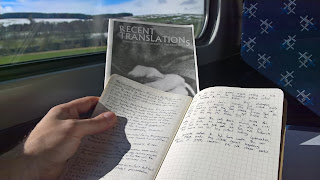 And this is today, reading a zine and writing notes. No pictures, as is often (more often?) the case, but still pen to paper, sun on the page, screen turned off and views passing by. I like this way of life.

Posted by Michael Duckett at 15:17 No comments:

I had a look around some Renaissance galleries in Edinburgh. The following photos are from the Northern (Netherlands) room in the Scottish National Gallery. They speak from a time and place which had a deeper, weirder, more original worldview than the mundane mass-produced one that we nowadays have to labour under 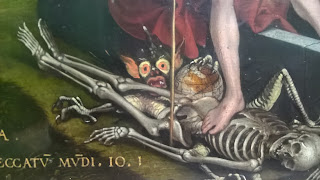 Creatures look out from corners of pictures. None of them wear spandex or deliver the expected, easily-contained message that we are used to. None are pets, none are God. 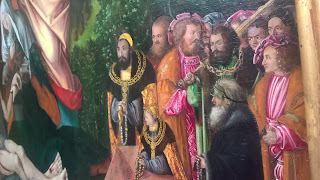 Notice the oddness of scale here. Our position in the frame was not so straightforward, so predictable. Faces loom, or veer away, in picture after picture. Some of them, frankly, unsettled me - where were we to stand in these scenes, where was the ground and the place of safety? 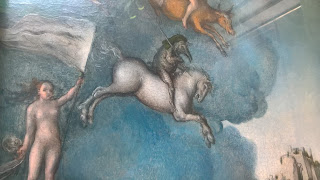 Witches appear, and no doubt fulfil a symbolic function that could be explained away, but their impact in the fringes of these scenes spills over any pre-set meaning. 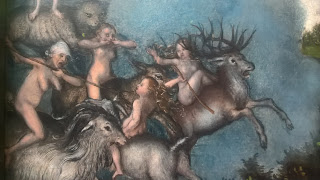 The cacophony of detail, of a fertile unpressed imagination, is ready to invade any potential crack in the story. And there are many cracks in these stories, that cannot be explained by a simple Bible tale. 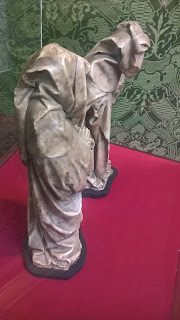 Hooded monks. Two survivors of several dozen which once fulfilled a social and status function.  They're not just mourners, though, they're spooky, awful, sinister, multilayered. I first 'read' their hoods as monstrous faces, and I don't think that was a mistake by the artist. 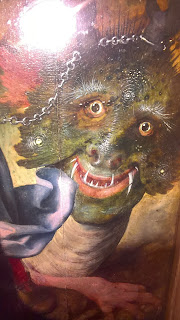 A minor detail disrupts a simple narrative. There is always something more than that which an easeful, calming, soothing and reassuring portrait should deliver. 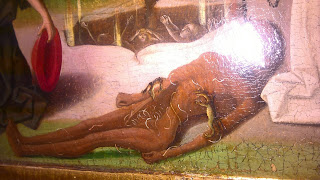 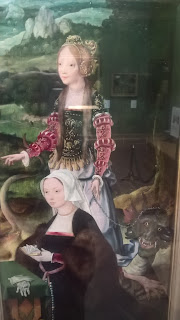 A bigger fragment, notice the chained beast to the side. She is elven, a non-assuring vision of female beauty. Like an alien - like the 21st century pale intelligence alien of modern times. But with none of that scifi claptrap and just the darkest, deepest, inhuman eyes. 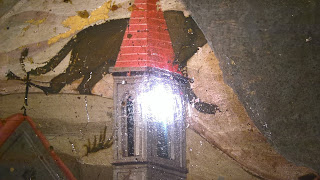 Elsewhere, the detail is a beast in the sky, its head now lost, the church steeple showing its scale. Its function? Its role? Its impact on the world that was once depicted in paint on an internal wall? 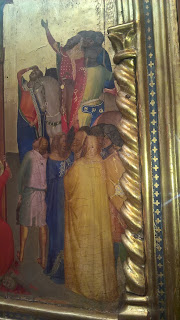 Painting, yes, but not painting alone, or contained so easily within the standard white-box gallery frame. I don't know the name for these three-dimensional framings and interruptions, when used within a painting. But the way it changes the function of the painting is one that again destabilises, and frees-up the flair of whatever that painting delivers. 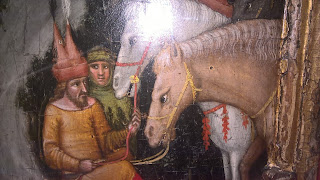 Heretical animals, worshipping the godchild, but look at those eyes. And everywhere eyes are facing unexpected ways, conveying ambiguous holiness, shiftiness, knowledge, innocence, emotion or calm. There's just too much going on, and by odder-than-necessary characters. 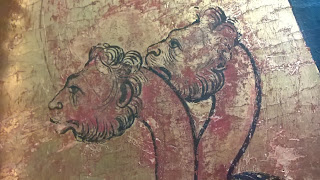 These heads, just added on to a chair ancillary to the main picture, the main portrayal. No one really knows why they are there, an example of the added, unexplained edges that are garnished to so many of those pieces of art. 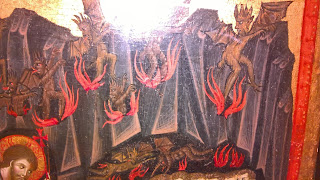 Some demons, standardised for a change in this bigger picture. Like a reminder that such other creatures, other powers of desire, remain to threaten and undermine us when we step outside of a straight path. 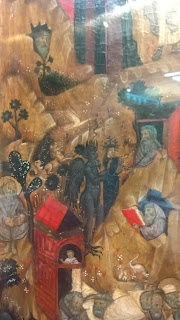 In the same picture multiple saints, hermits, hiding, trying, and the depiction of temptation, the power of these disallowed urges. The complexity of a striving for their then-moral universe, and how flawed it was. No-one gets out of that scene undisturbed, undistressed. 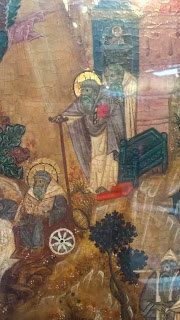 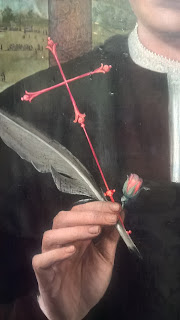 And the symbols of the Rosy Cross in this portrait.

We will never know what depths and greater aims were meant to be conveyed in these paintings. But I know that there was a hell of a lot more going on than in the average exhibition, film, comic or religion of these, our contemporary mundane days. A small gallery, Edinburgh.
Posted by Michael Duckett at 14:34 1 comment: