A day of strangely-coloured heavy rain, watching it from inside as I update my blogs & run a luxurious afternoon bath.


2012 is running out and I have a variety of un-updated, unfinished and unreported things on this & my other blogs. So this post is my statement of intent : what I intend to finish, what I intend to report, who I intend to draw with and what I wish to be over with when the year ends.

I drew each of the speakers at last week's Interfaith Week at Newcastle University. These talks were happening in the building where I work, so I decided to step outside my usual routine, go downstairs and learn something different during my lunchbreak. As my Pagan Geordie Yearbook makes clear, I do not have a monotheistic worldview and so I felt a touch (initially & silently) at odds with the 'one god creator' outlook of the majority of speakers. And yet I admired their outlook, I almost wished I had it. That all humanity is one, that all monotheisms share that one thing and so the bigots, literalists and scumbags of each religion can be transcended. I think I learnt a little respect.

[My pictures will be posted here when I have scanned them.]

The final speaker came from a pagan perspective, and is the original reason I noticed the series of talks and thought it would be worth going to. And yet, interestingly, I found I could not gel with her outlook, with her version of paganism. About karma and what the different paths mean and about the anglo-saxon version she inhabited : in fact it was all the side of paganism that I reject. She was very good, very down-to-earth and intelligent in talking about it all, and yet her perspective was almost entirely opposite to mine. I suppose this must be a common experience to people with a strong faith who go to see someone else explain it. But a first for me, and food for thought.

This open collective of Newcastle-based comics makers and comics enthusiasts contributed pieces to an 'Alcohol & That' Anthology aeons ago (almost as long ago as the 'Music & That Anthology', which likewise disappeared into the aether). It has stalled, due to minor but annoying technical hitches and printing things, but now I have the pdfs and an £80 budget and so I expect to get it printed in time for the Canny Comic Con on 8th December. If you are free, you should definitely go to this (free) event, it was apparently amazing last year but then, as now, I am working away each weekend of the season. So I won't be there, but you should be.

At last week's Paper Jam meeting I drew this picture 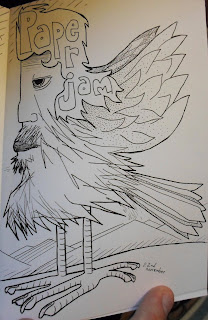 And I took this picture of the crew, who are lovely. I find their company and their interests and their willingness to share and create a continuing source of affirmation. And at every session there is someone new to me. A gem in Newcastle's DIY cultural scene. [to upload]

A previous post announced my intention to be a paperboy, and I did it, I just don't seem to have recorded it, so I'll write that up in a separate blogpost. It was pointless and fun and made me happy not to have a real job.


[update - I HAD documented it all along, I'd just done it on a blog I'd forgotten about and just re-found with pleasure.
Click HERE for the report! )


4. People sometimes talk to me

I've been asked to participate in various people's projects. I never prioritise this, because I quickly find I can get lost in not getting any of my own things done, so apologies to those that I say 'not yet' to or just don't get back to. I still think you're probably wonderful. But I'm not ashamed to prioritise having baths in the afternoon or mooching about in lonely sad thoughts instead. It's about being genuine to myself first and then reaching out and joining in when it feels right. (And it's also reason number 57 why I'll never be a 'professional' or be able to afford a mortgage.)

A few things I did do, eventually: (b)  3 posts for a theatre company's blog about the hidden gems of our northern cities. Click here for them. I look forward to properly reading all the other good people's posts properly one day soon - I've scanned them of course, but I really want to sit down with a coffee and the luxury of leisure to think and dwell on what they see and how they share it.

(c)  a picture of bakunin for a greek art magazine, 'South'. I'm not quite sure why they chose me but it's for an article on Bakunin's time in Italy.

And I have a couple of things in this line still to do:
-   a cover for my local community organisation's annual report
-   coffeetalk with Jake for his 50cuppas blog (here)
-   & I might also still respond positively to Baltic 39's invitation to do something for their Jim Shaw show, despite my childish aversion to the gallery industry. For now though, I would like to share my email response to it, as it makes me smile:

"Hi there,
Thanks a lot for getting in touch with me. I feel I should have something interesting and relevant to offer, yet this month I am feeling really rather flat and exhausted and generally in retreat from people's offers to link up with me. So I'm rather pathetically going to decline, or at least postpone, your gratifying invitation!"

Oh, & early in the new year I also hope to contribute something to Giz's next zine project, & for the marvellous Loosely Bound collective, based around Bradford which remains the hub of my affections and real loyalty, despite not properly living there for 18 years.

(a)   The Beacons Collaborative Festival Zine is still in a bag - I meant to finish and print it last month but got too sucked into the Big Draw. I intend to get it done before 2012's out.

(b)   Elfzine, will be about and for the people who I work with at Kielder Winter Wonderland (we are elves for Santa. Yes, really). I won't therefore print tons or share it massively publicly, but am aiming to get it done next week.

(c)   And that, happily for my finances, is all my paper-culture commitments for the year. The next Opinionated Geordie Monsters is due out in the New Year though, so consider yourself invited to go to a gig, draw a monster, and tell us your thoughts.

Or whatever they pretend to call themselves. 'Online publications' or even 'zines' are what some folk call em, but they're basically simulacra, useful for sharing, & not in my opinion actual things of being. The Beacons Zine will become one of these, and I will get round to putting Geordie Monsters and the Pagan Yearbook into that format too. But 3 shorter projects to come first are:

One thing I started doing quite a lot in 2012, and which I am glad of, for creating a watchable record and letting me learn new skills, is the video recording of (some of my) participatory drawing activities. They are featured in previous blogposts here. I actually plan to STOP doing this now, because it takes up a lot of time sitting in front of a computerscreen, and because I will be continuing to do it for one of my pay-work jobs. Instead, I wish to draw more, read more, experience the outdoors more, do physical things, and maybe even hang out with people.

There are two, and they are both in the same place, and I am (joyfully) not in sole charge of either of them. I am just a support-monkey, able to contribute my bits without having to shoulder the stress of "will they work, will they get damaged, what do I need to get ready for tomorrow".

The foyer in the Star & Shadow was, in my opinion, under-used this last year with just a couple of (good but brief) exhibitions and, of course, my own stuff (Big Draw most of all). At present there is just the remains of some Big Draw artwork, some posters, flyers, sofas and a wee bit clutter. But come December, we'll be displaying some of the screenprinted posters & other things that have been made in the cinema's screenprint workshop (not by me), and come January there are exciting plans for doing a Big Draw style event - but for noise. We are calling it the Big Noise, and details will follow. I know almost nothing about noise, its creation, its physics, its manipulation and its opportunities, so I will be in wide-mouthed novice mode and hope to learn a lot of humility. Sometimes I feel a relief that the size of this world and its components is so much more stupendous than my little mind can take in.
Get in  touch if you're interested. Sam Grant from Blank Studios is taking the lead, so thankfully there's someone onboard who knows what they're doing.
[ update - The Big Draw got postponed due to work commitments, but will hopefully still happen ]

In December I'll be visiting the Natural History Museum in Tring - see here - and passing through London. I also hope to visit Liverpool so will likely pass through Manchester too. Travel diaries may follow. But I have no big trips till January, when I hope to go north, in pursuit of the Aurora Borealis, and to experience the Up Helly Aa festival in Shetland. Drop me a line if you want to come too. 2013 will be a peak year for the Northern Lights, and I still crave the seeing of them, so fingers crossed. And if I miss them, I'll console myself by sitting in various warm pubs with traditional music, remembering the flame of Joe Scurfield. 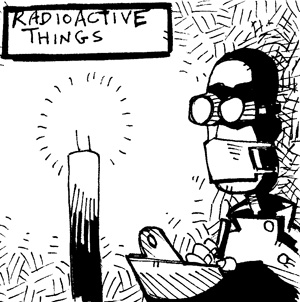 The PaperJam-linked Science Comic, digital versions of the Pagan Geordie Yearbook, and with the wholesale attack of Tory government on the social, intellectual & cultural heart of our region, I feel we'll have a good upsurge of proper politics too. Bringing down the government should be on all our New Year's Resolutions.

Posted by Michael Duckett at 08:36 No comments: