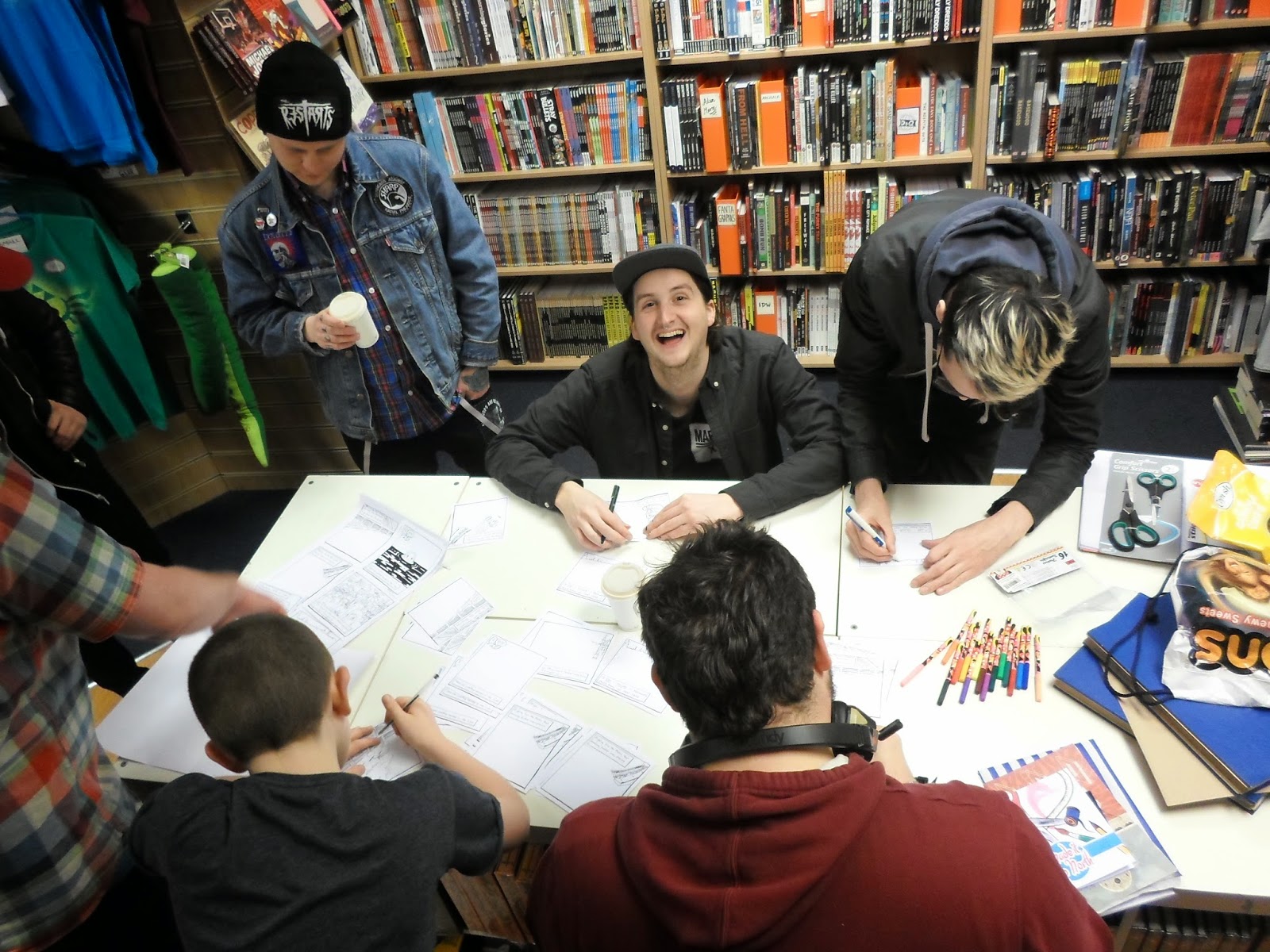 On the day I flew out of Newcastle, there was a great zine and comics fair organised in the basement of Travelling Man by Jack Fallows (a man famous for his shapely calves). I could only stay for the first hour or so but was determined to contribute. So lovely CJ (pictured in typically smiley pose, above) let me prepare a collaborative comic for people to take part in.

There are as many forms of collaborative comic as you can think up. For this one, I created 6 panels with a little bit of text and a glimpse of Newcastle architecture drawn into the background. The 6 panels add up to make a loose sort of story, whose meaning would be fleshed out by the pictures drawn. Then folk coming into the comic shop were each invited to draw a panel - kids, shoppers, punks and comics fans, see picture above!

Because there were some very talented comics artists already downstairs, and they all took part in drawing some lovely panels at the beginning, it got underway really quickly and we were already almost out of panels by the time I left. These photos are just the ones I took before leaving for my aeroplane, but I hope to see the rest of the panels and get perhaps better photos or a more interactive way of viewing them at some point. 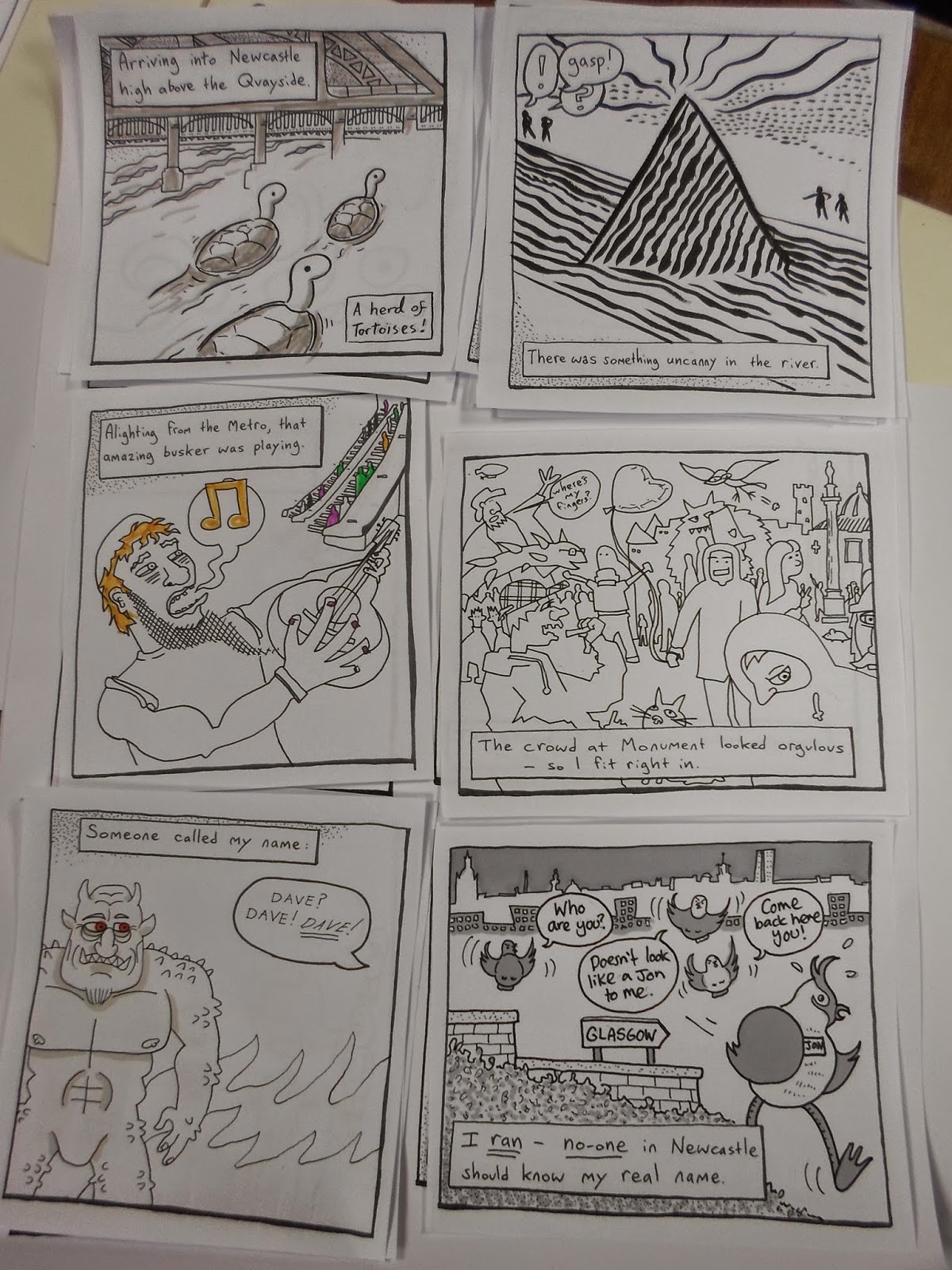 I'm really happy with how this drawing experiment worked out. People did not know what style or nuance the other panels would have, and so that engagement with others' unknown style or ideas was successfully taking place. That is what I personally find exciting about drawing with others, and I think this had just the right degree of rules to make it a fun exercise to play with. 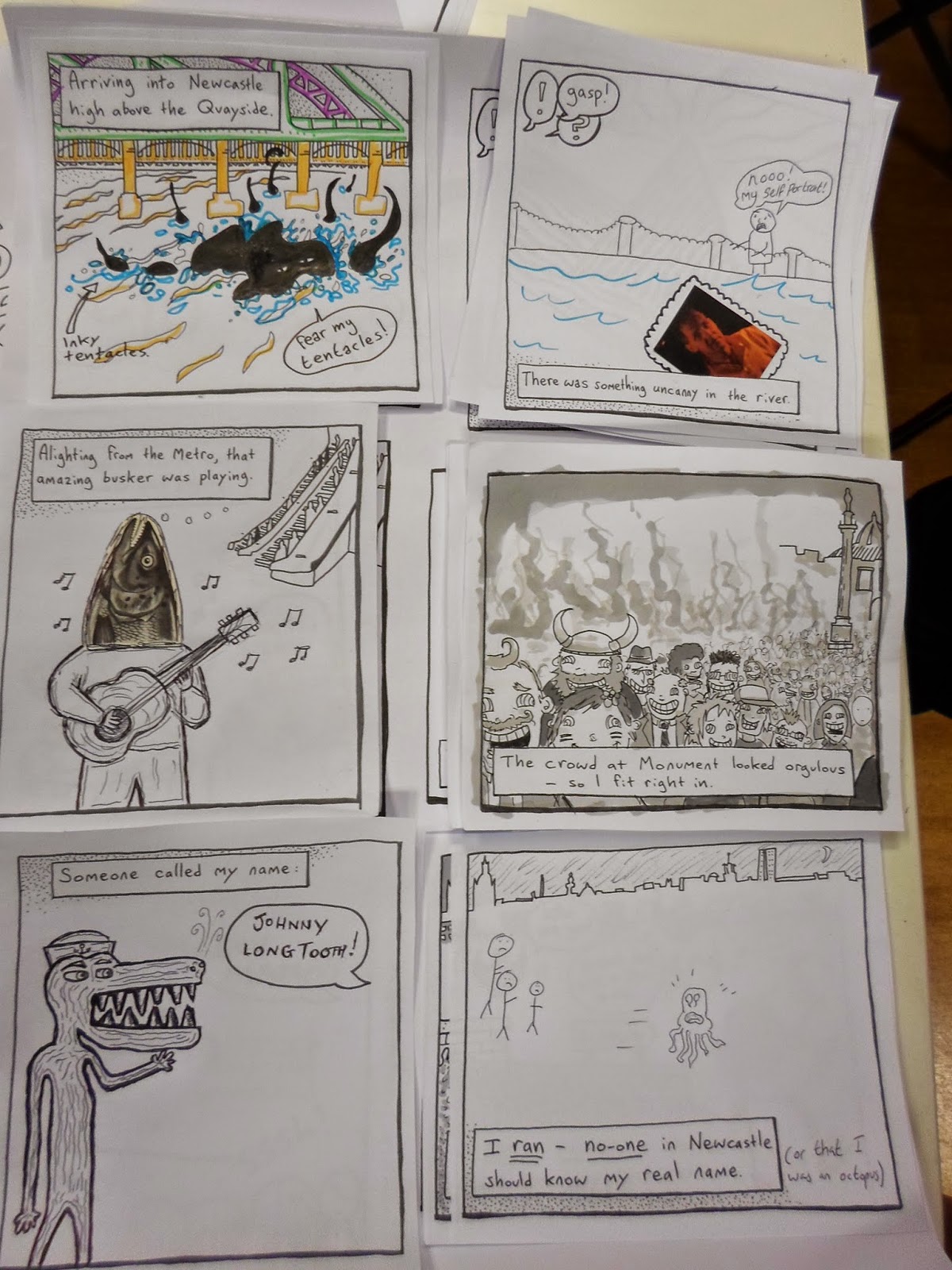 I was also happy at using the term 'orgulous' in one of the panels, because it is a now archaic description once used complainingly of the people of Newcastle, meaning they were unruly, ungovernable and full of proud, fighting spirit. People tasked with drawing the panel of an orgulous crowd did not know what the word meant, but their picture instead provided the description of the word. 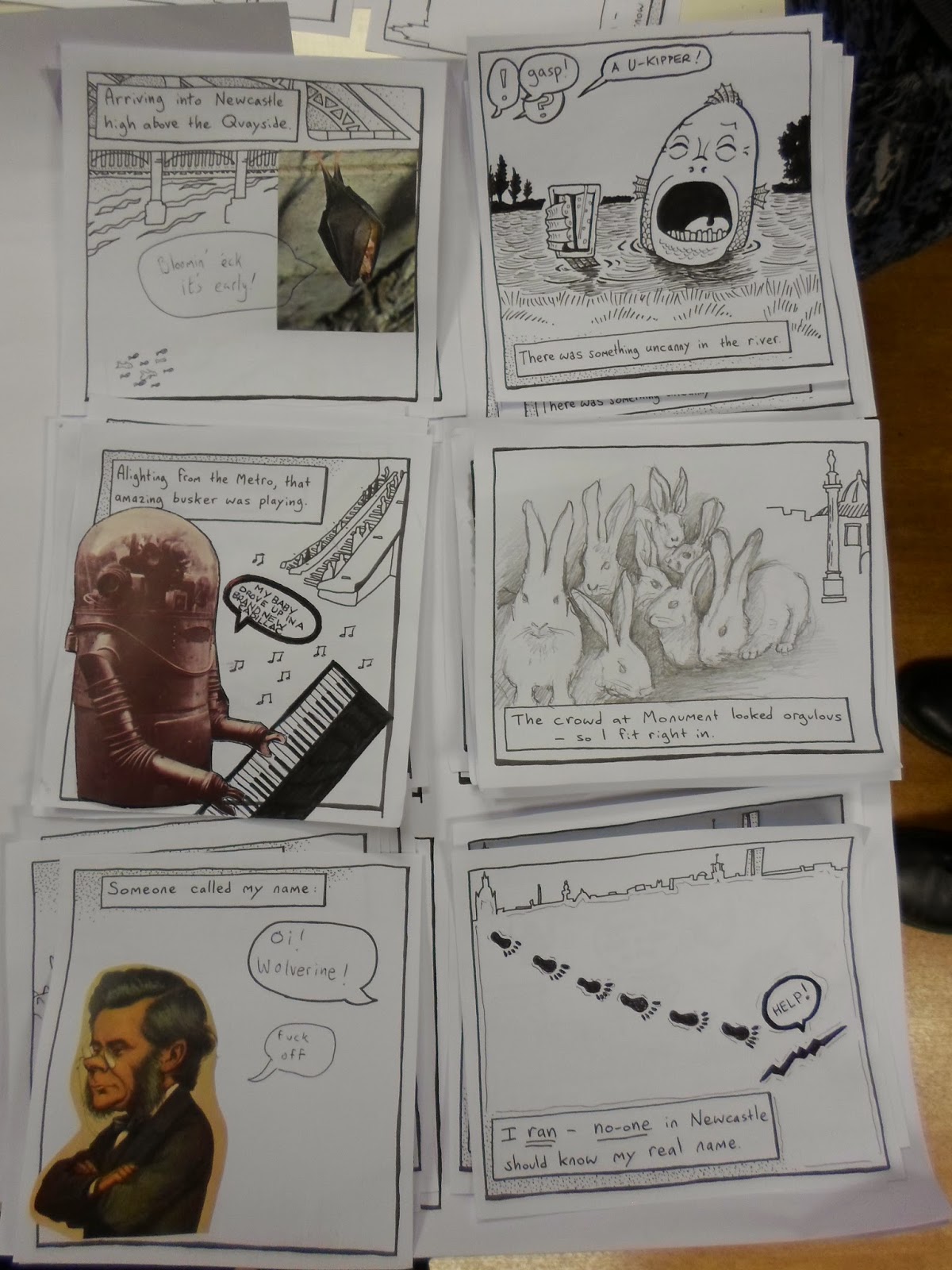 I'm looking forward to picking up the rest of the panels when I next see CJ or one of the Travelling Man crowd, and rearranging them to give different versions of the story, see which picture matches which, getting a collage-only version perhaps, a child-friendly and a sweary one.
And I hope to draw with you soon again. 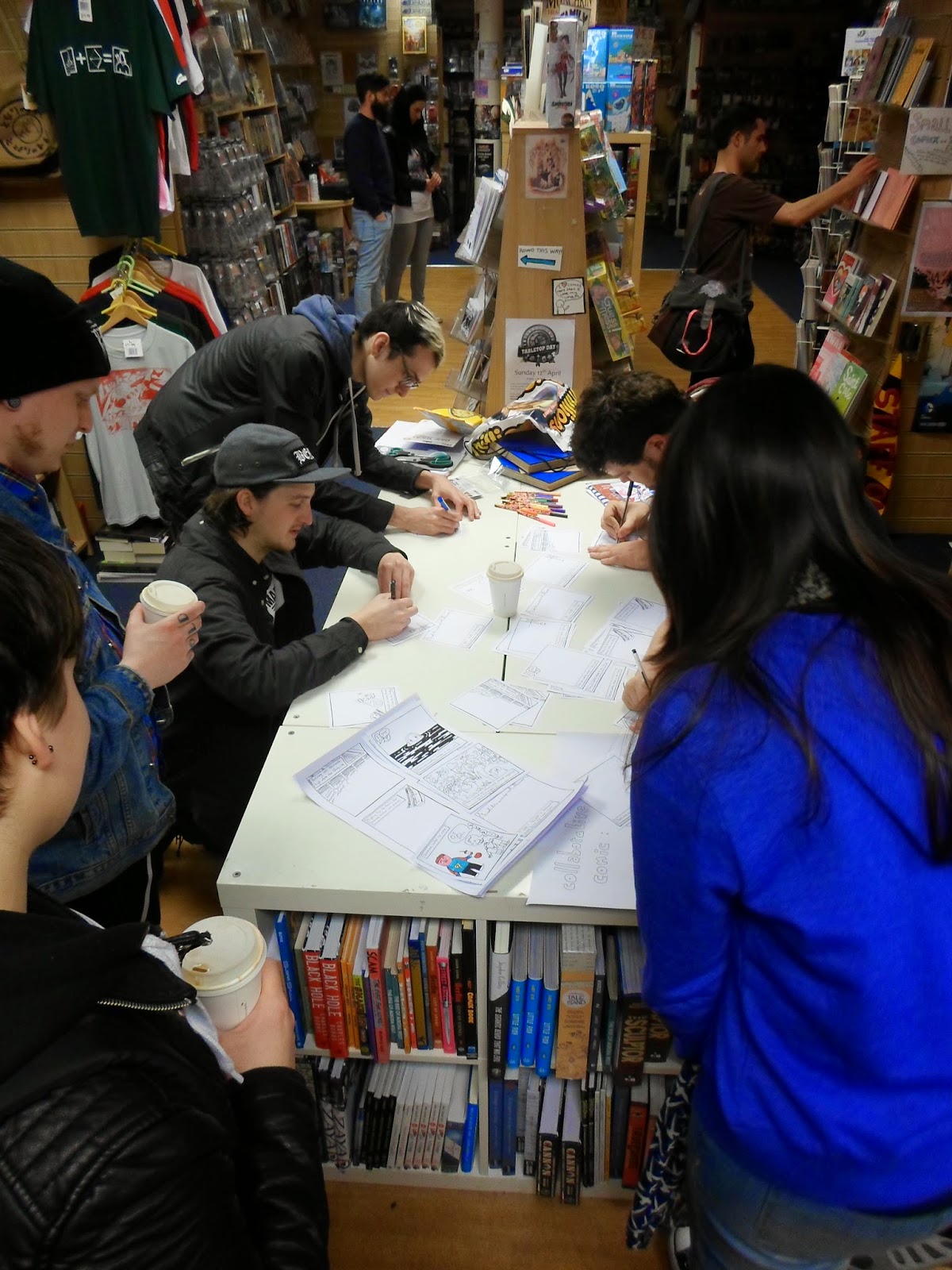 Posted by Michael Duckett at 04:31 No comments:

Lundy and the Bit Between

Second visit to Devon in one month. Equally expensive to the last, it means I won't be able to afford my big summer adventure anymore, but I'm happy and tanned again and here are some of the now-standard sketchbook pictures.

I took the boat to Lundy and walked up the north end of the island and back. It was pretty idyllic and a lot of the cliffs raise your heartrate. Here are some : 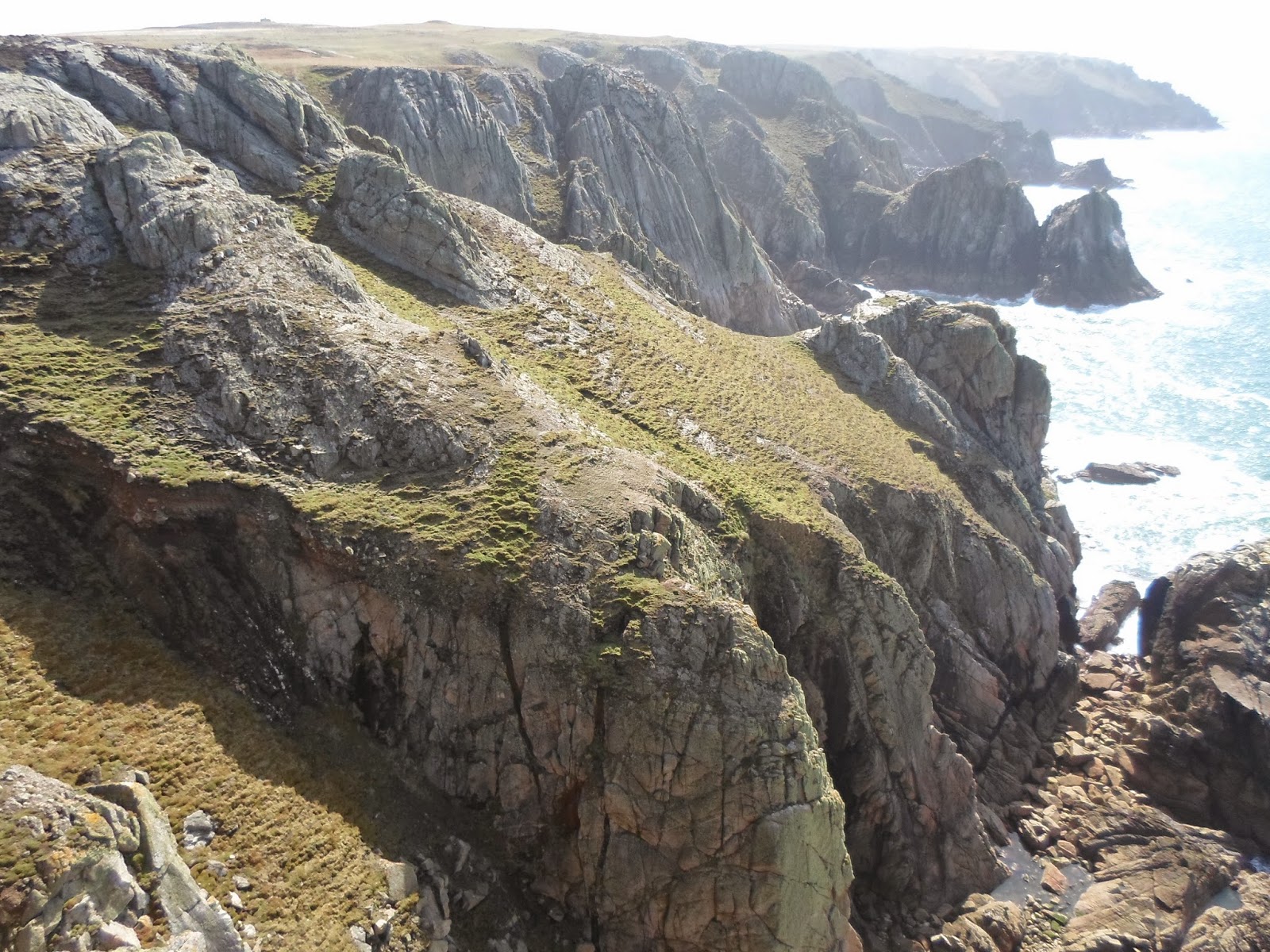 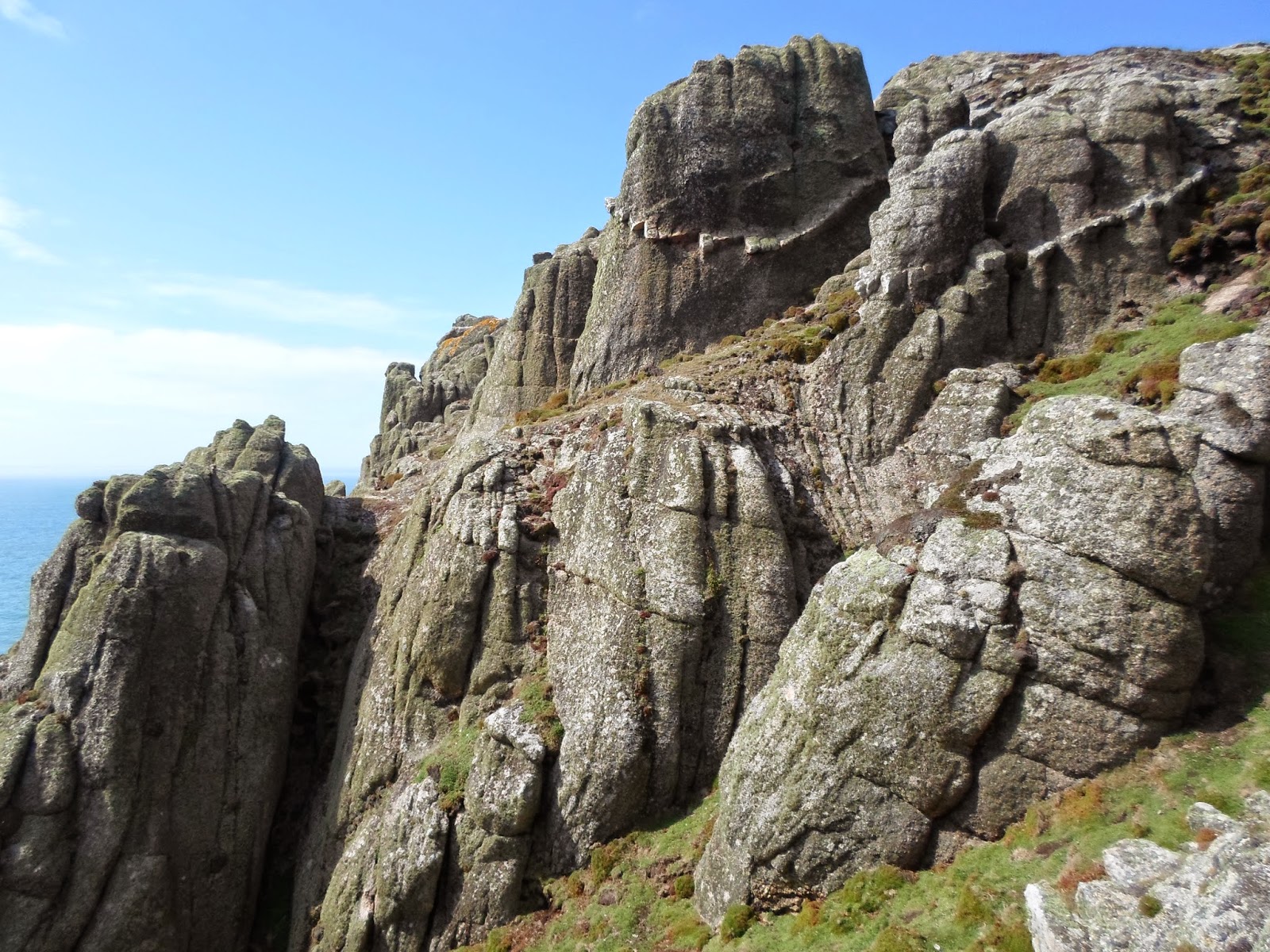 The cliffy bits I was drawing here are the petering out rats' tail of island at which MS Oldenburg docks : 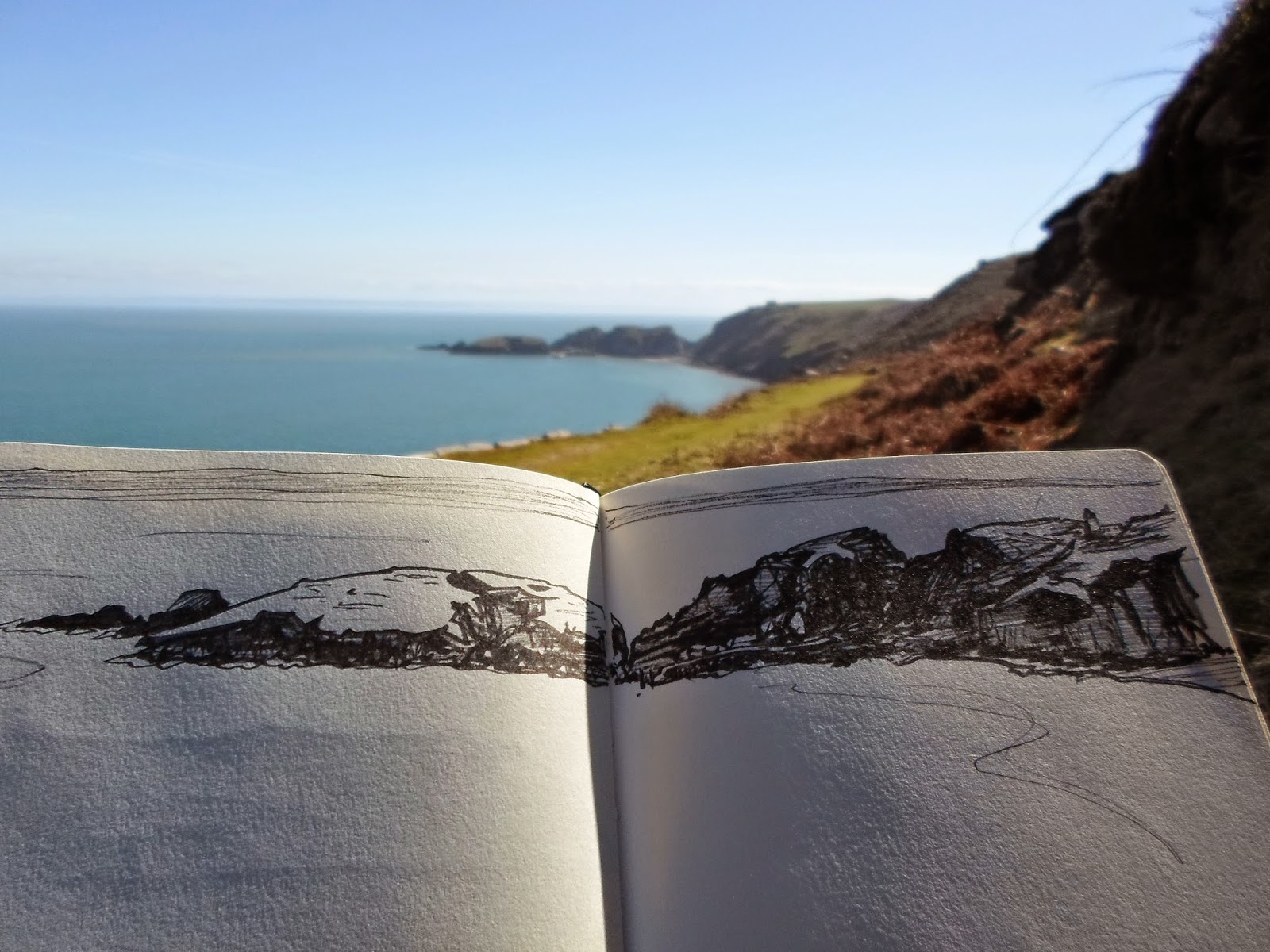 But despite my unflattering description, its rocks are also pretty lush when close-up, like this one : 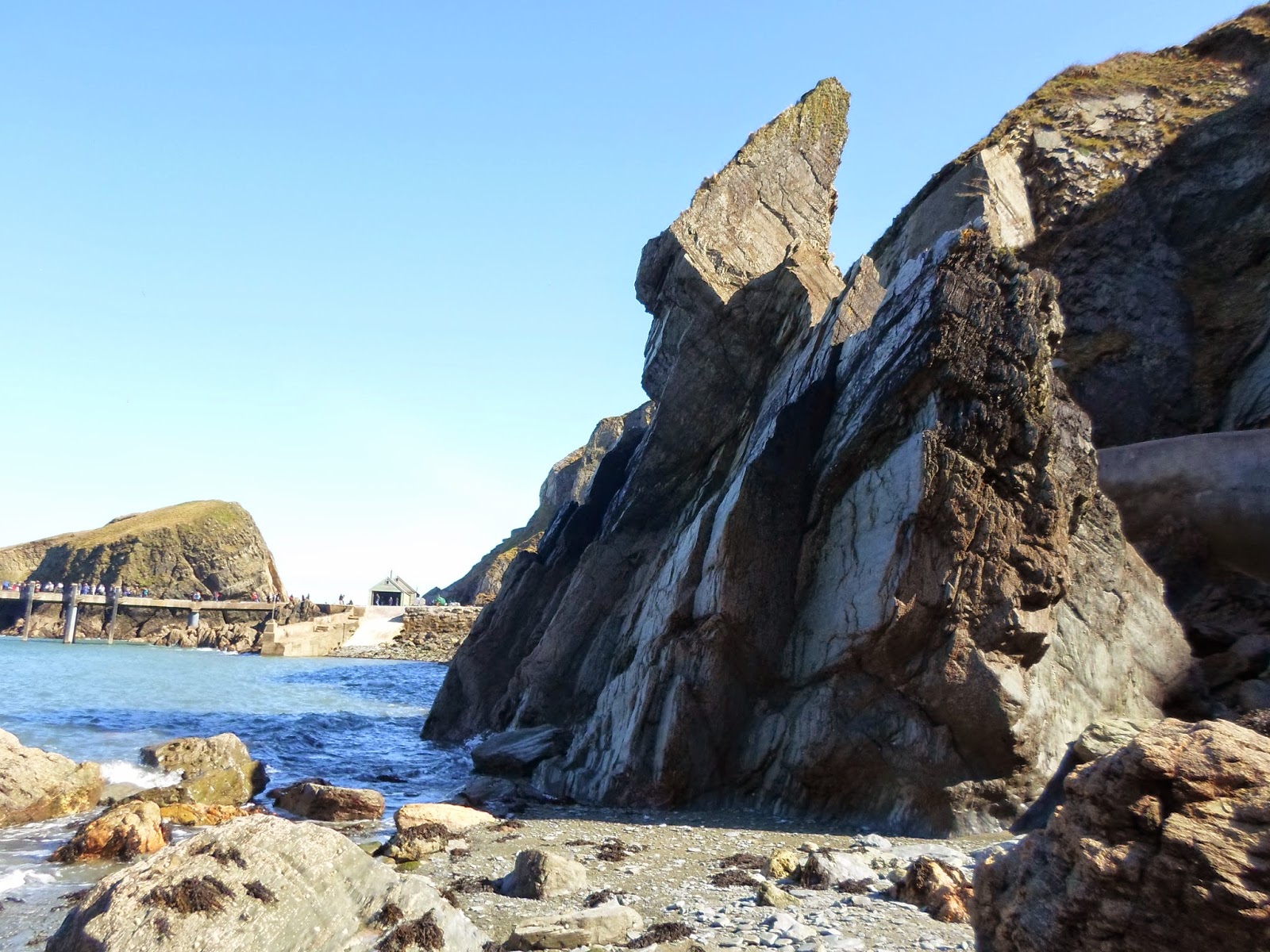 So that's the rocks done with. I couldn't not mention them. There were also baby soay sheep, deer, ponies, highland cattle, grey seals and some falcons. Plus the birds of summer - barn swallows, skylarks in full song, and meadow pipits in abundance. I've not seen any of these up north yet.

But these next pictures were all done on the boat, and clicking through them makes a strange sort of portrait of MS Oldenburg, which was chockfull of children spewing up into paper bags : 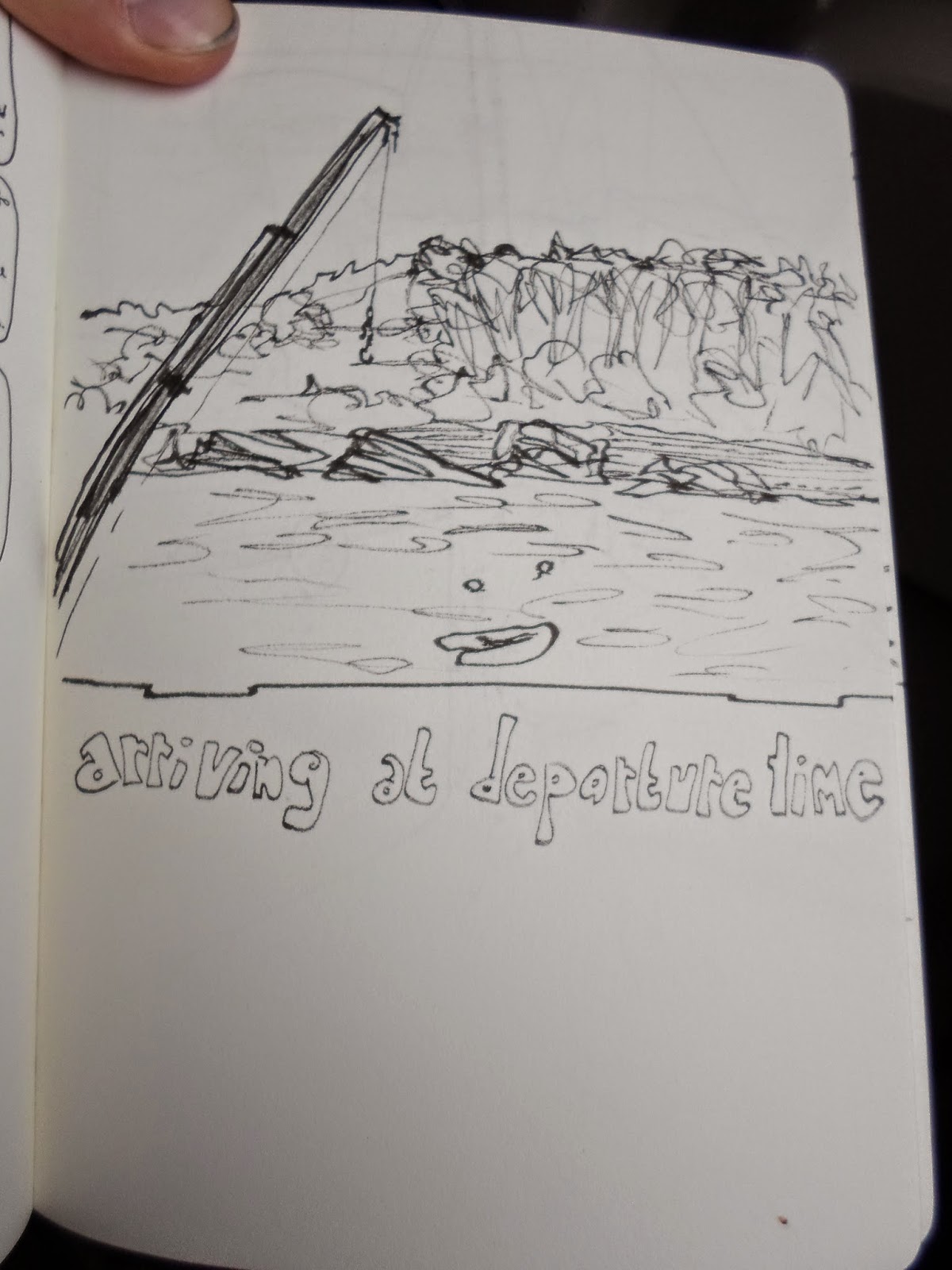 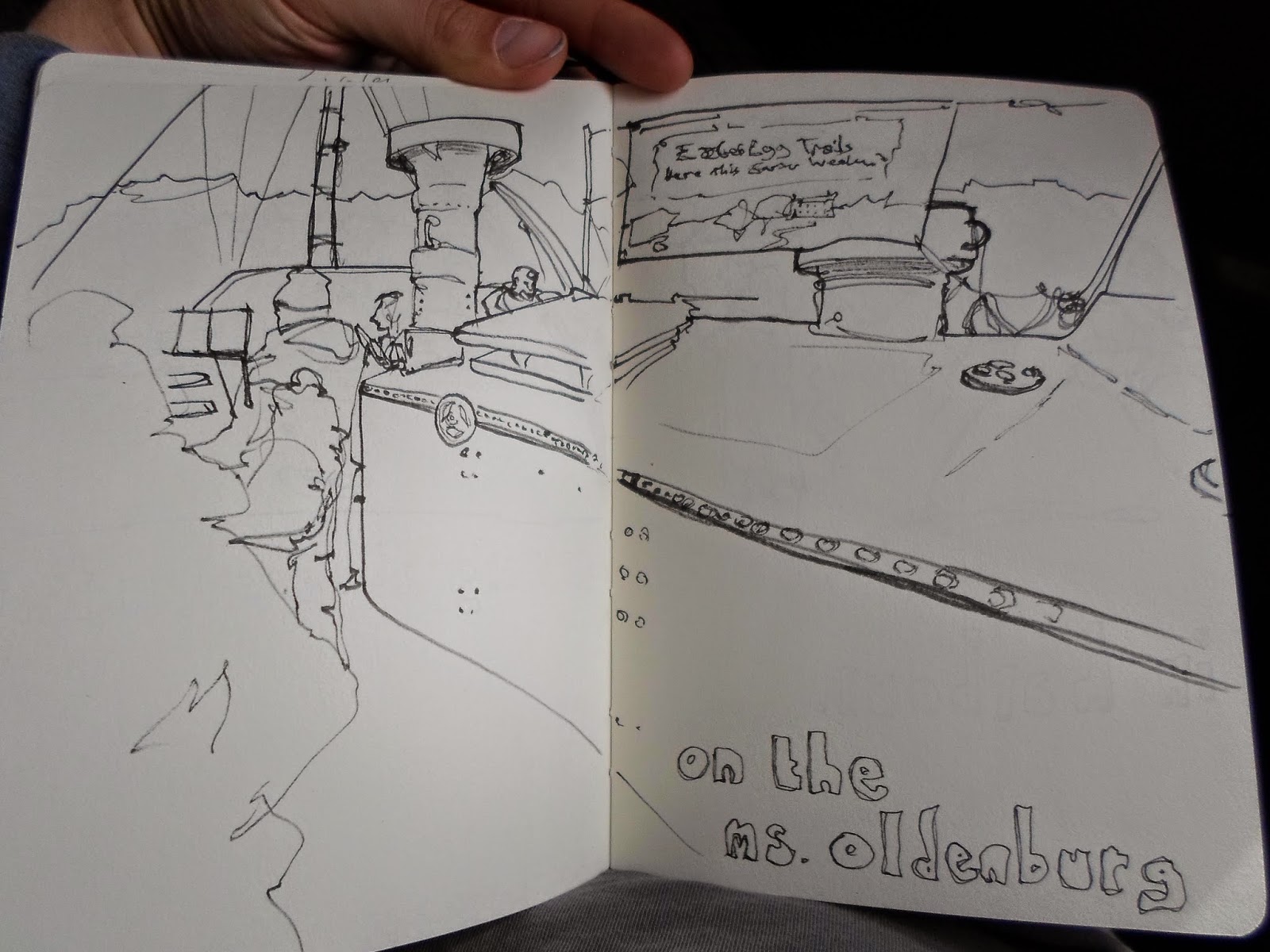 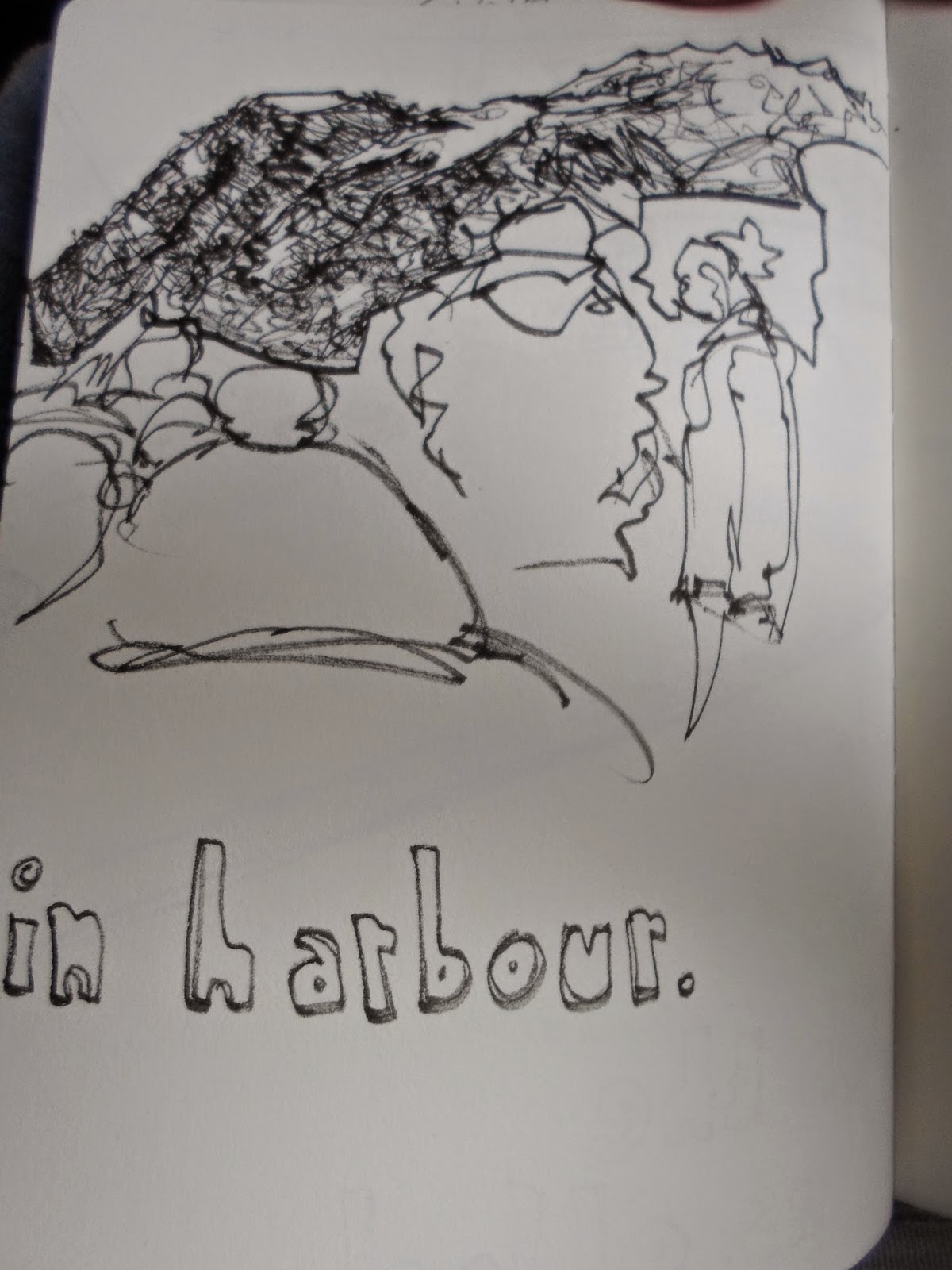 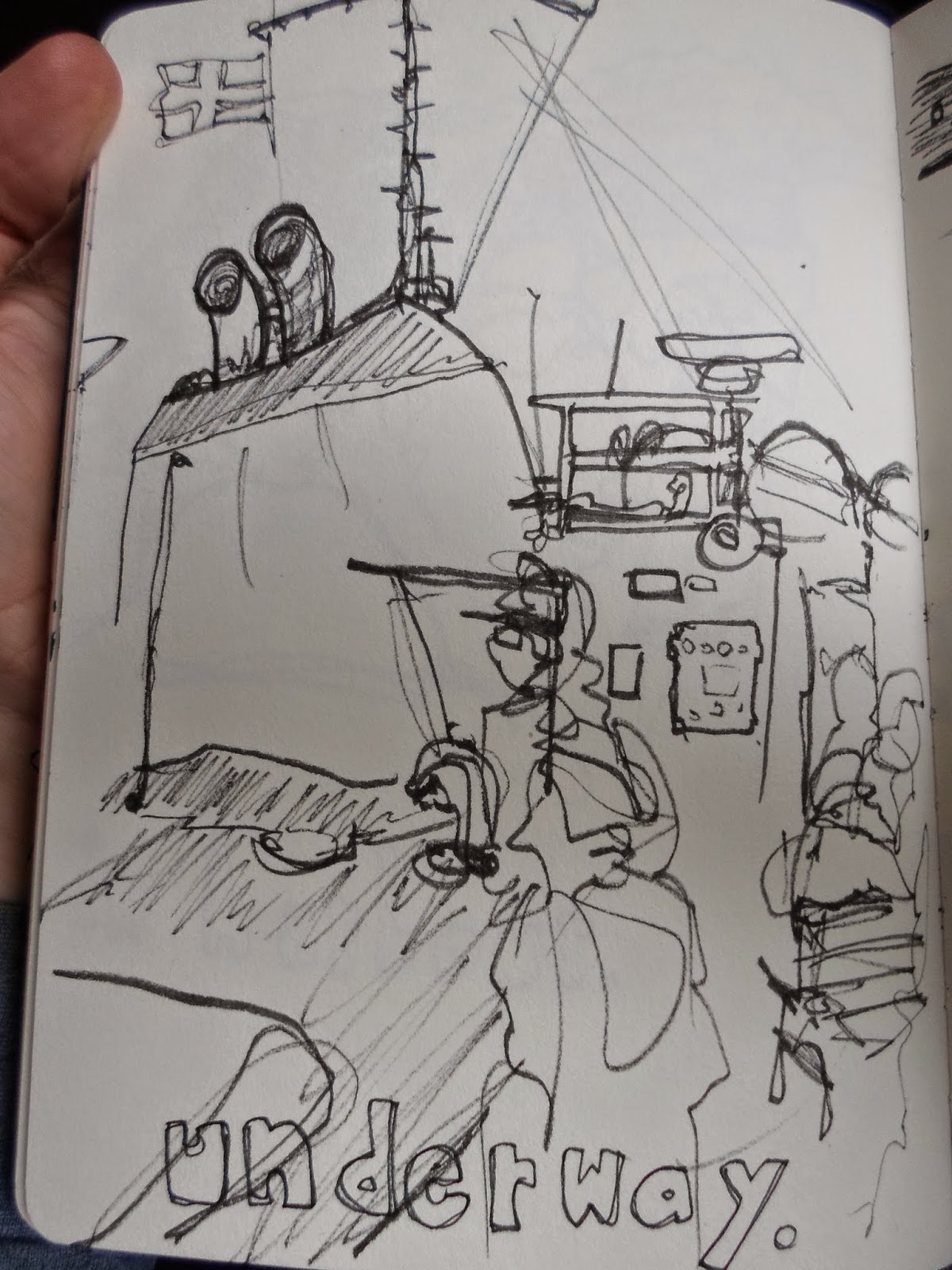 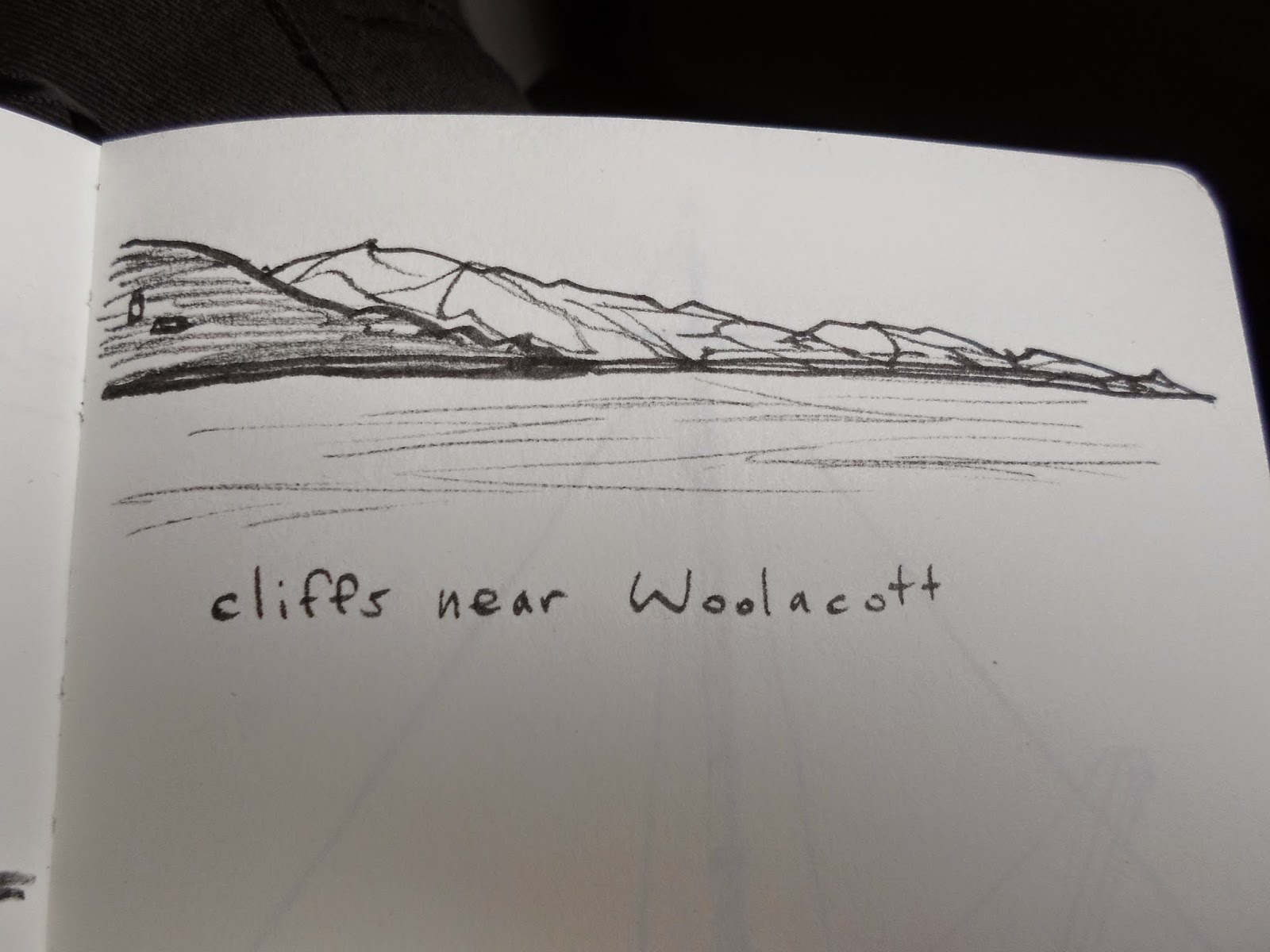 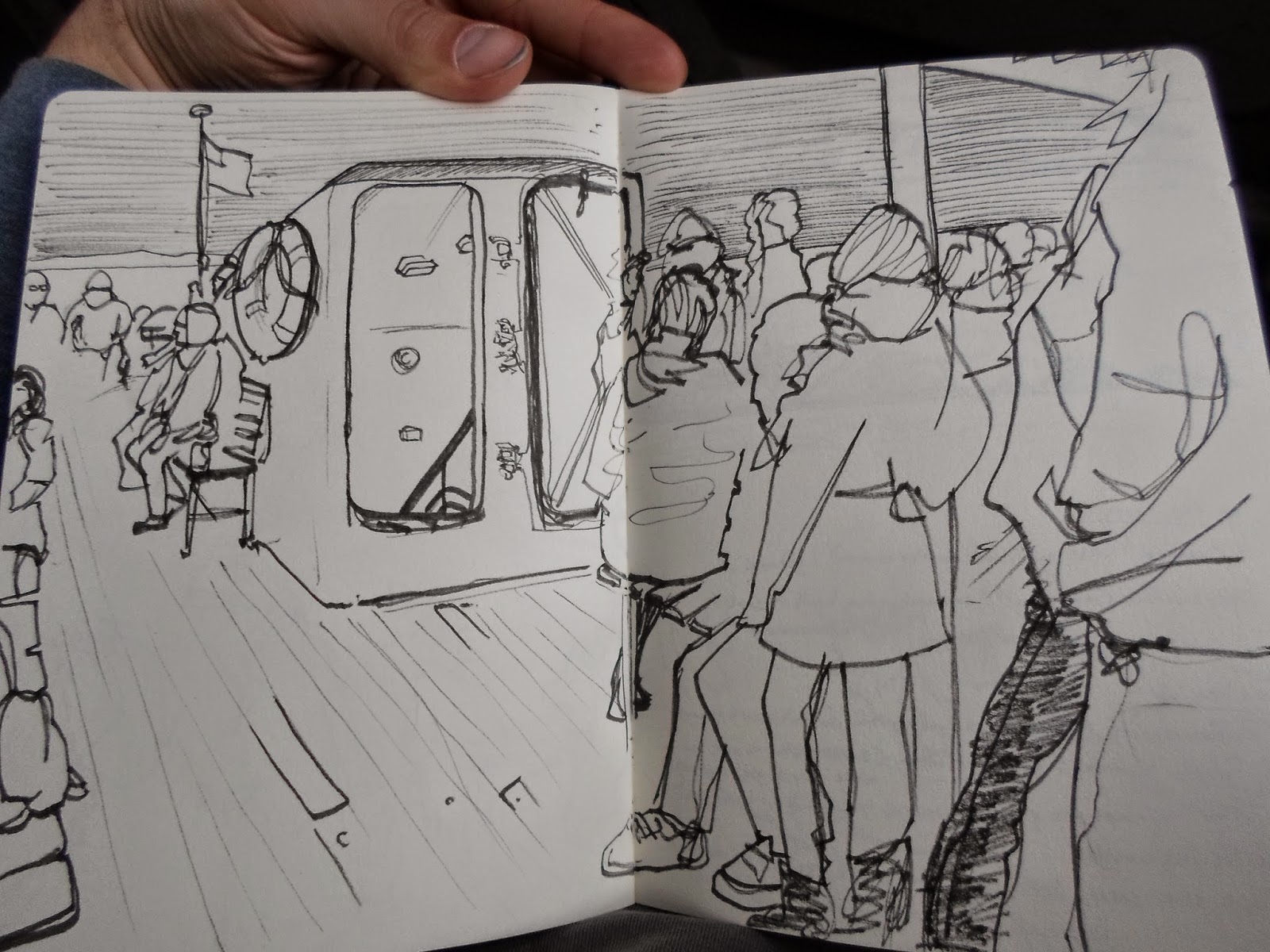 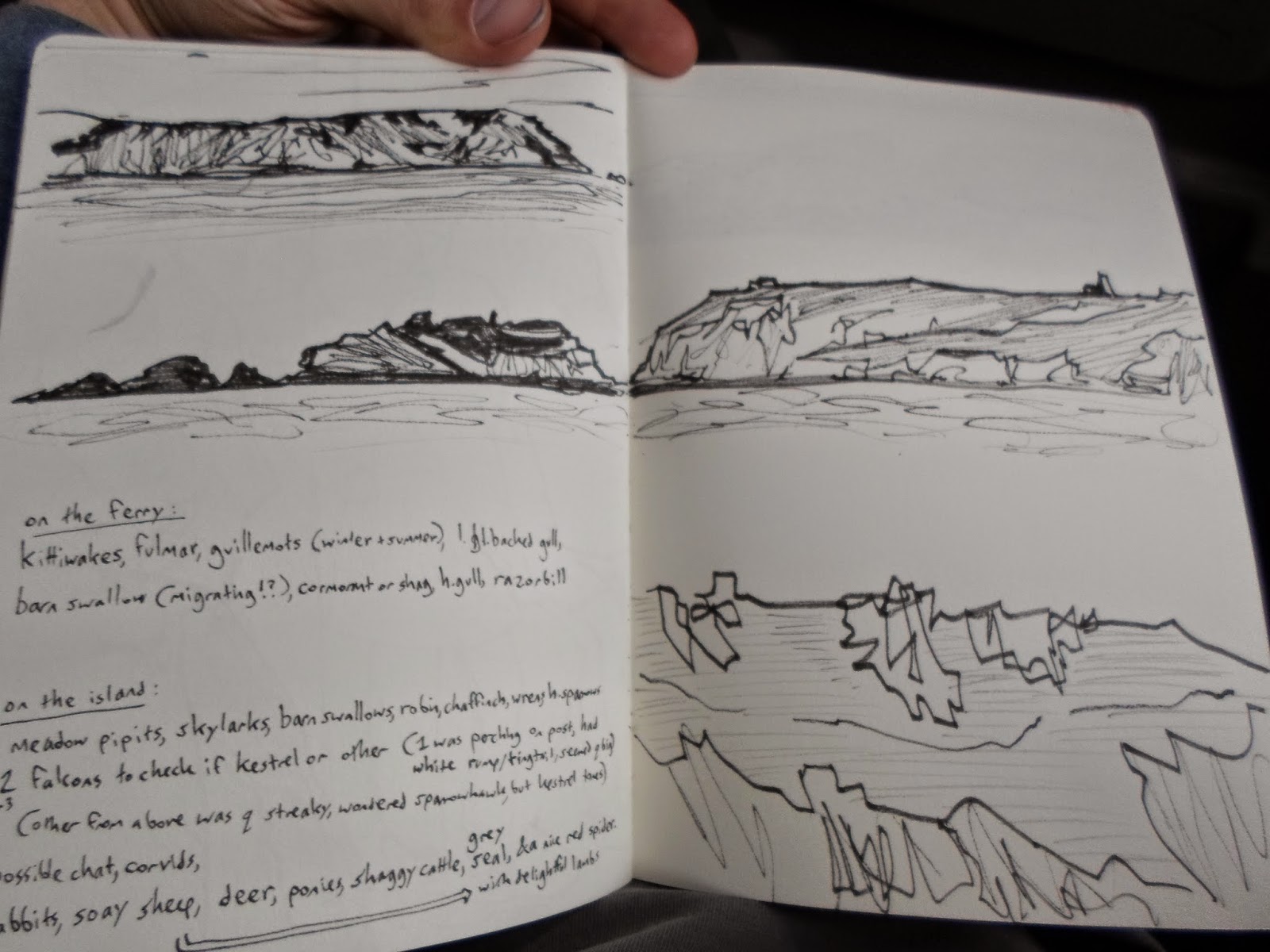 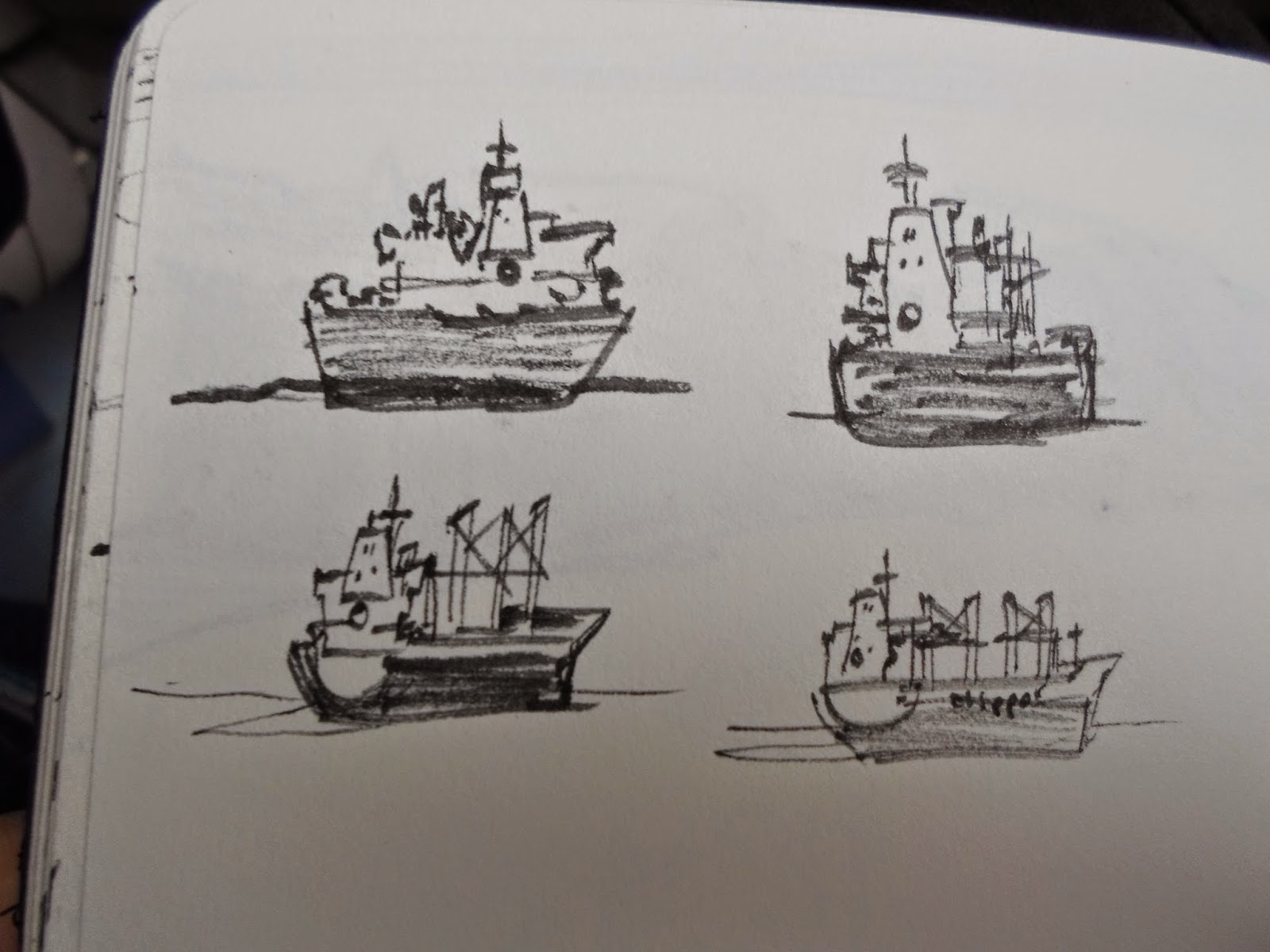 And finally (I'm not boring you with what I actually did in any detail, my diary heard all about it so you don't need to) : 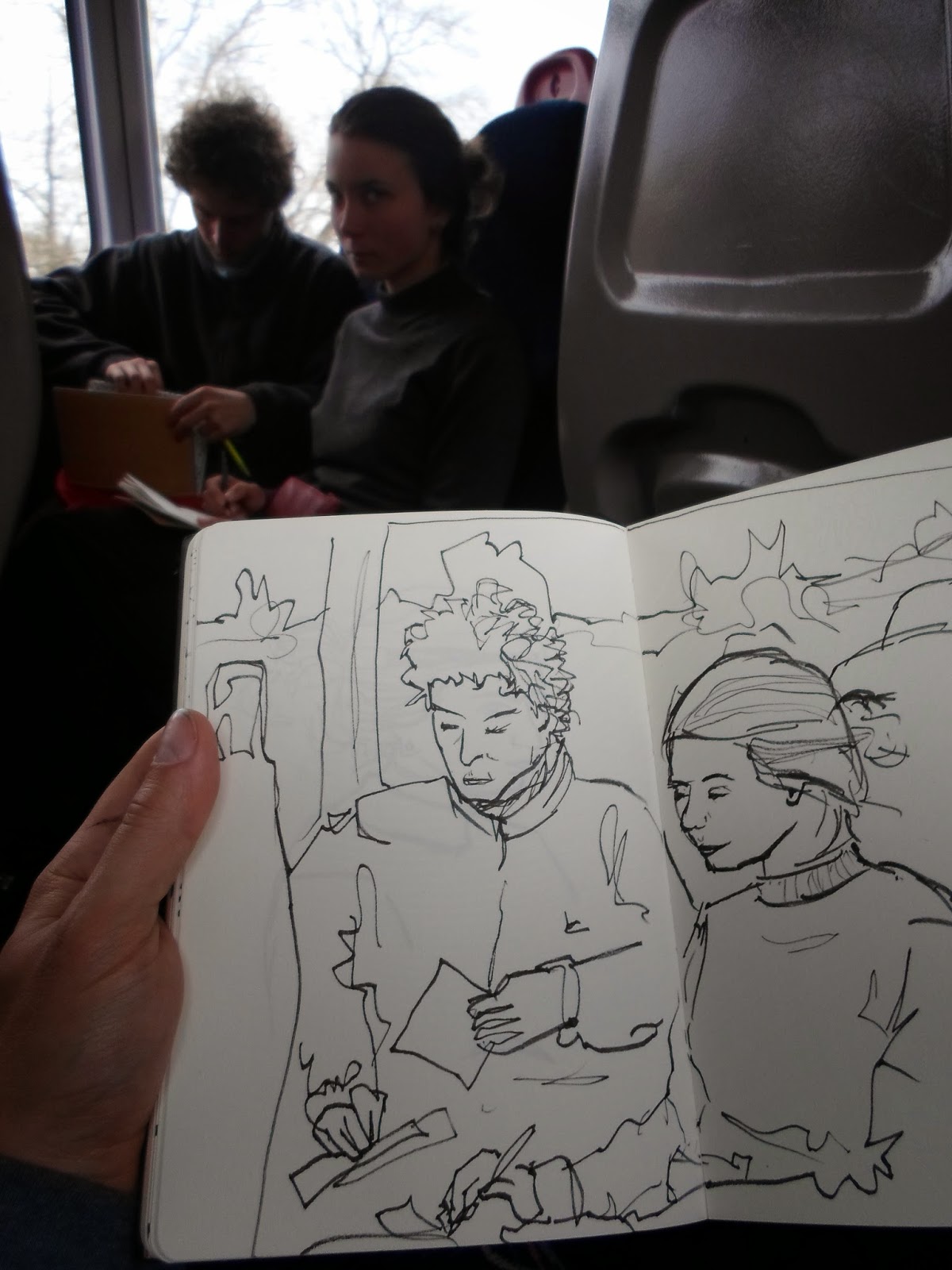 Friends Birke & Bjoern, being drawn on the train to Exmouth 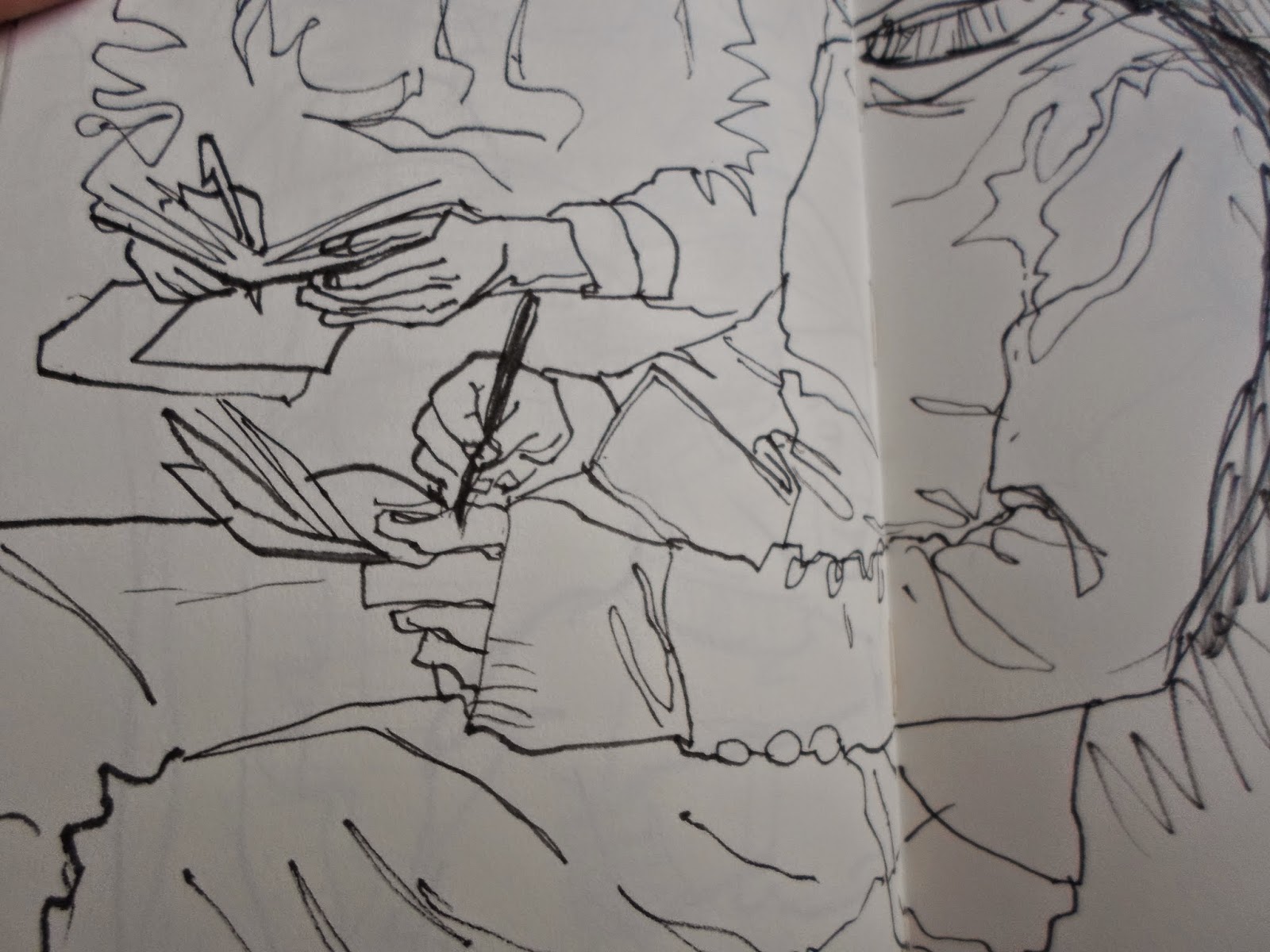 And Birke's picture of me, drawing them in return: 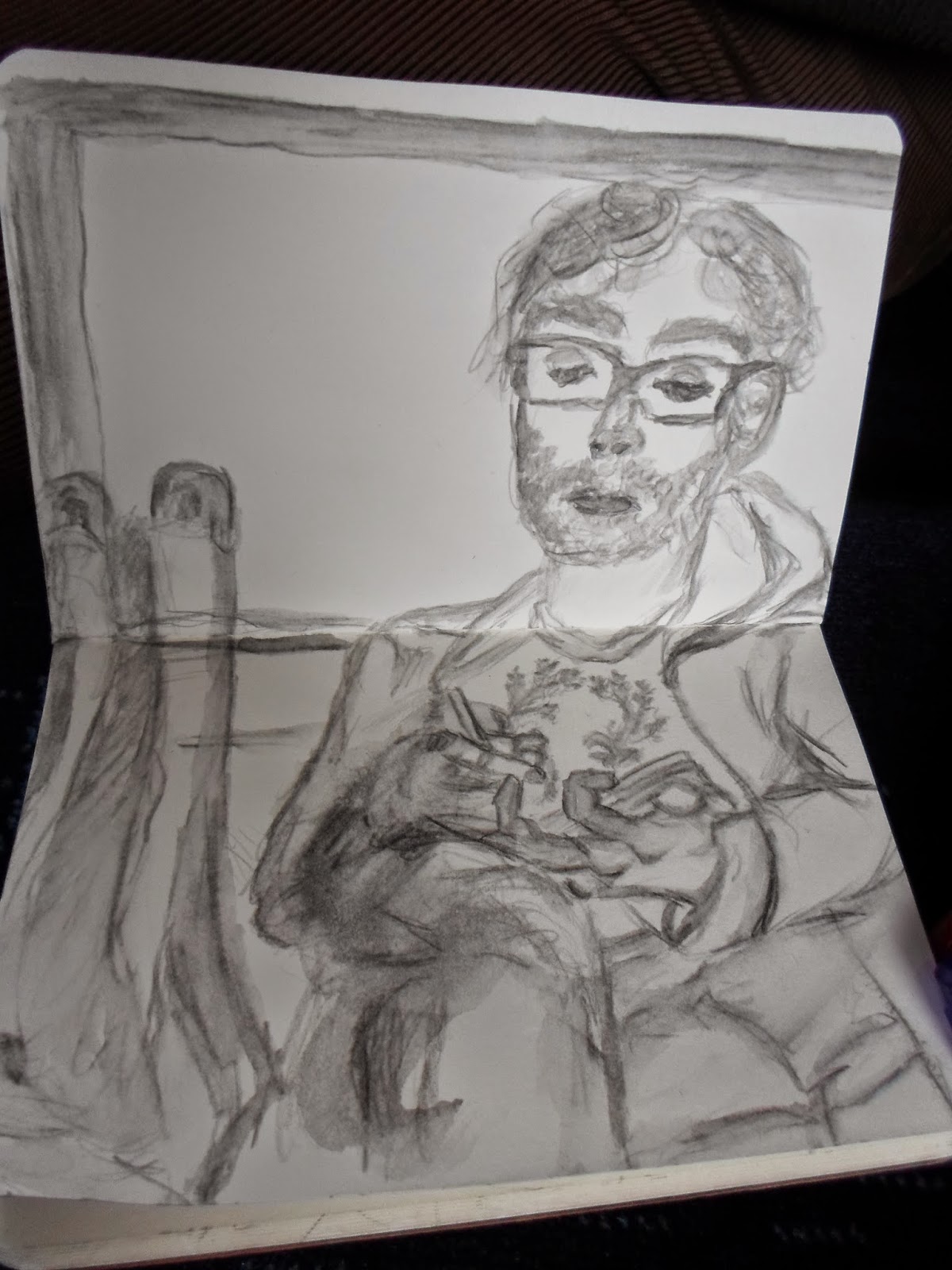 I'm glad I draw. I think it is better than drugs for a healthy-feeling mind. And Lundy's nice, I'd like to go back with you.
Posted by Michael Duckett at 09:05 No comments: