Last attempt at a festival.

First the train was late and I had to miss the Hebcelt festival on the Isle of Lewis. About THAT one I was gutted.
I had to miss Rolling Hills, tickets bought, because old school friends came to visit. That was okay.
Redefest got rained off half way through. But I still had a good day.
Beacons was flooded and cancelled as we were just setting off, and 'Leave me here' cancelled too. That was more dramatic. I got drunk.

Tomorrow morning I'm giving it one last shot, to the Vale of York and then to the North York Moors, (so long as wages appear in my bank tonight, that is). It's like flipping a coin and it landing on tails 5 times, still hoping for 'heads'.

Then the next Opinionated Geordie Monsters comes out - so much for it being the festival edition, ay.

After the first announcements of the riots, and asking what had caused it (the BBC wasn't saying at the time, but word was out that it was another street execution by police - the lesson here is when there's unrest in Britain, don't trust the BBC to report it accurately), I didn't pay them much attention. In a grand strategic sense, a battle between consumerism and the state has no heroes for me to root for. Just victims to empathise with.

But since then we've had days of escalatingly bare-faced cheek and an almost psychotic hypocrisy from the professional commentators, media spokesmen and politicians. Scumbags the lot of them, and all so privileged and safe that they thought their looting & their 'criminality' was beyond challenge. So I will remember that injustice, remind myself that it's only the weak and dispossessed who suffer, and also that it's only them who are available to be punished. I quote:

Gerald Kaufman (£43,564 expenses including 4 grapefruit bowls at £540) says 'I condemn the naked greed of these criminals and their taking advantage of their pampered and privileged opportunities ..'

David Wilshire (£160,532 expenses including £100k on a flat 15 miles from his main home)says 'My honourable friend has hit the nail on the head. This is not about ideology, it's sheer naked greed...'

John Healey (£84,562 expenses including £6,194 for renovating his kitchen ) says 'We should understand a little less and condemn a little more,Mr Speaker; only tough action against these feral youths will do...'

Tim Godwin (acting head of Met Police after resignation of Sir Paul Stephenson due to corruption probes and in command during Mark Duggan’s shooting by police officers) criticises ‘the criminality and wanton violence’ involved in the riots.

David Cameron (one time member of the Bullingdon Club Oxford University, alongside Boris Johnson and George Osborne, notorious for its members' destructive binges and drunken vandalism of resturants, churches, bars and other establishmets within the Oxford area) condems the 'pure criminality' of the rioters while agreeing that those who destroy "loot and pillage their own community" should no longer be allowed to live in social housing’.

Boris Johnson (one time member of the 'socially exclusive' Bullingdon Club Oxford University, alongside David Cameron and George Osborne, notorious for its members' wealth, priviledge and gratuitous drunken destructive behaviour) ascribes 'An excessive sense of entitlement" to those who looted.

Nick Clegg (guilty of two acts of arson at the age of sixteen for which he was given community service) stressed a need for an end to 'the needless ... destruction ... the priority ... to punish criminals involved'

Ursula Nevin (mother of two from Manchester), reportedly slept through the riots and did not participate in any way. The 24-year-old wailed in the dock as she was sent to prison for five months by a district judge. It is alleged she accepted a pair of 'looted' shorts from a friend.
Posted by Michael Duckett at 10:27 No comments: 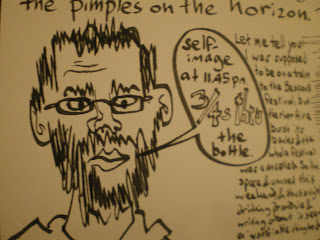 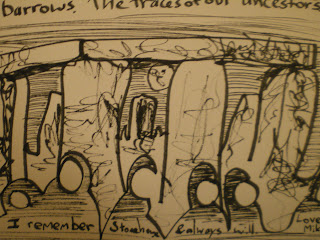 With Beacobs cancelled, I have instead [produced my 'alcohol and that' two pager : ee folloowing post: [ shit i am drunbk as iu try and write this, long live abcchus#]

Morning after notes: Beacobs = Beacons, near Skipton. abcchus = Bacchus. And yes I did vomit. And also I have no memory of writing the above, nor uploading the pictures.

And here are the scans of the pages produced in the scientific experiment: 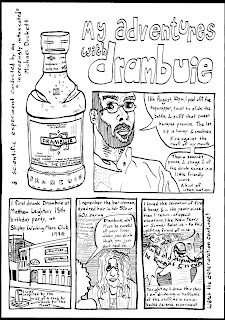 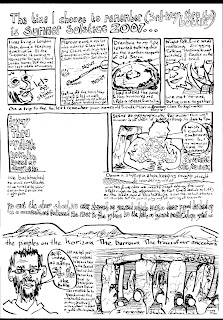 My festivals have been cancelled.

The festival that I was going to work at this weekend has been cancelled because the river burst its banks. See here. And so my much-prepared fanzine workshop must now wait till next weeek.

But last weekend's workshop at Redefest went rather well, I think, and produced a very nice, & coherent, collaborative fanzine.

The front cover was done by Sam Redding: 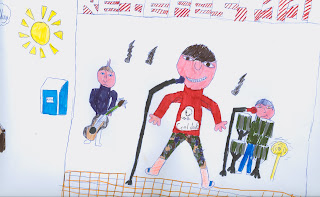 & here's how he imagined the festival if it kept raining as much as it did: 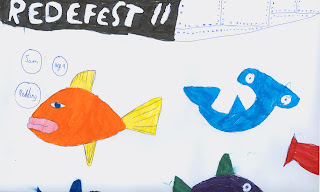 The zine was one half collaborative typewritten story, and one half monster reviews of the music. I got it printed today: 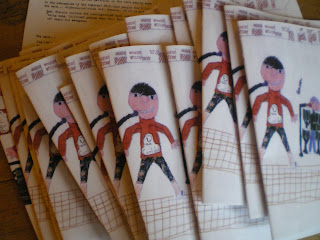 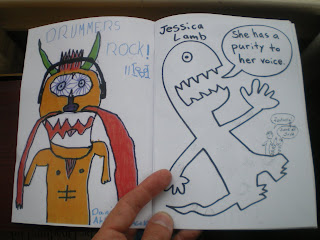 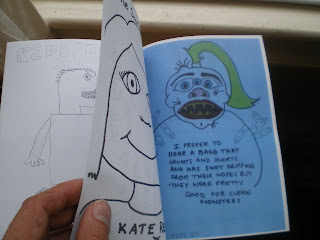 Posted by Michael Duckett at 16:23 No comments:

I've been half-arsedly sorting through my room this summer, and amongst the boxfinds are these booklets I never sent (along with a half dozen letters). Now seeing them I love the memories they conjure up, and will send them. Sharing diary/zine things IS a wonderful experience. 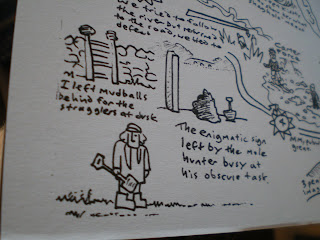 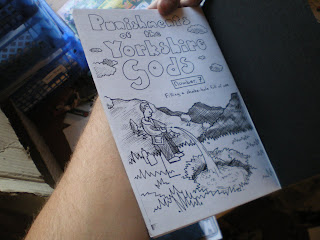 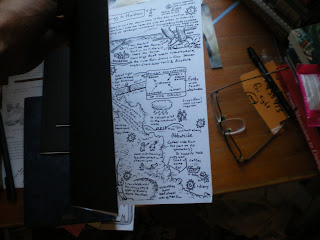 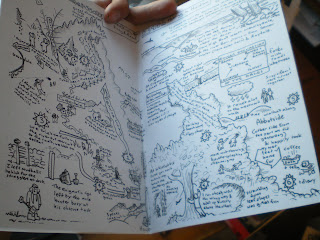 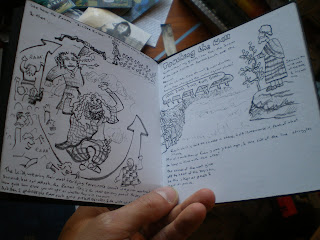 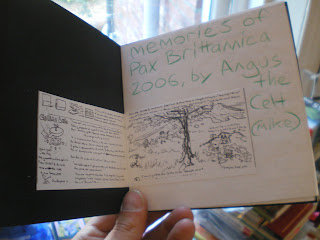 Posted by Michael Duckett at 10:11 No comments: