15 things in my Summer Sketchpad

Hello. In this post are scans from my current A5 sketchpad, mostly done before I add a bit of colour. I am about to run out of time (from tomorrow) to do anything extra like internet documentation so thought I'd share them here to show I still live. Also the coffee shop zine I've done for International Zine Month will be at the printers tomorrow and I hope to distribute it round Newcastle's coffee shops on Friday. A few of the pages here will be included in that zine.

You can either read this as a blog post for my brief bits of description, or just click on the photos to go through them. I'm quite happy with this - the limitations of the blogger/blogspot format - but I'm thinking of other internet ways to present things next year, too.

1. Despite aiming to not spend money, I spent a lot on train journeys here and there. 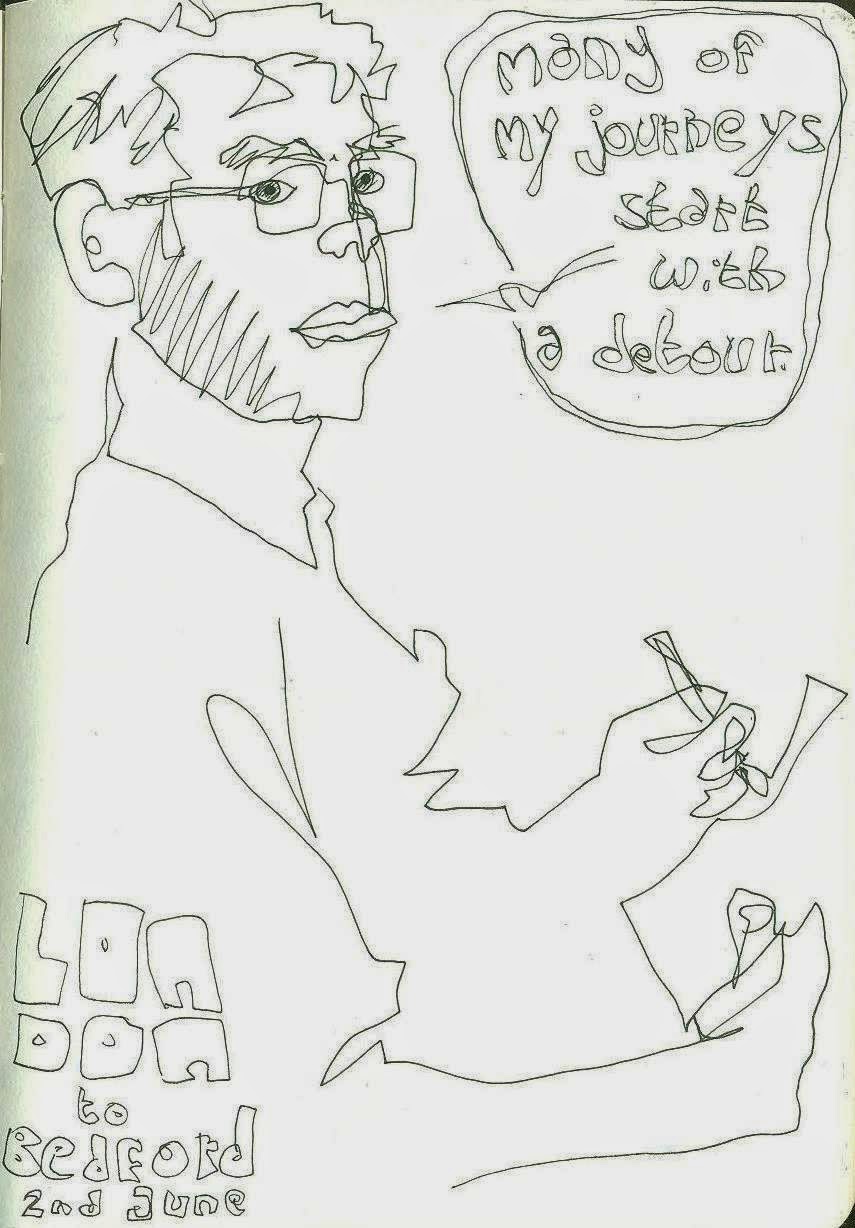 2. I went to a conference in Huddersfield, about Unofficial Histories.

3. I went to the Weekend Film Retreat at Burnlaw. The films were generally awful but the experience spending time with people was great. I also saw my first snipe of the year. 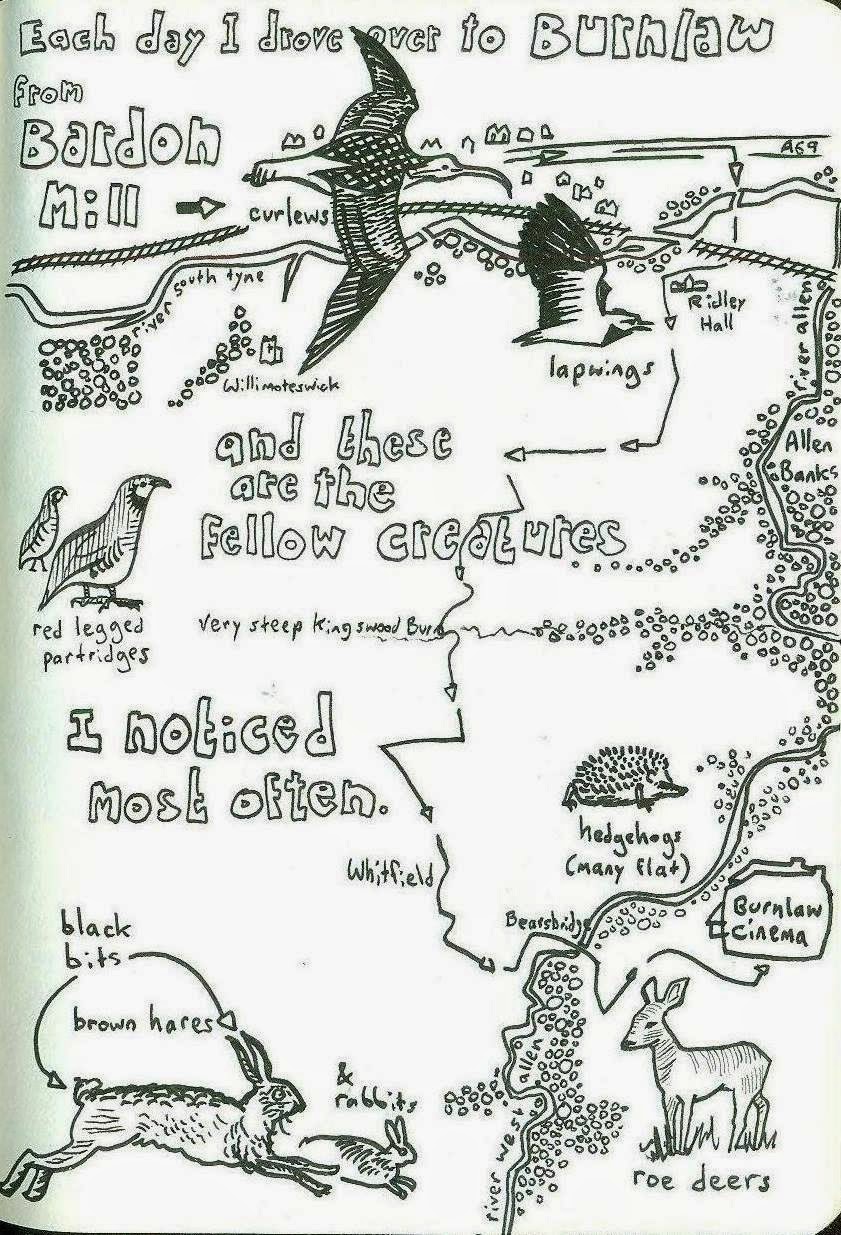 4. I went to another funeral, and again learnt more about the chap by attending, and learning more reasons why my knowing them was precious. 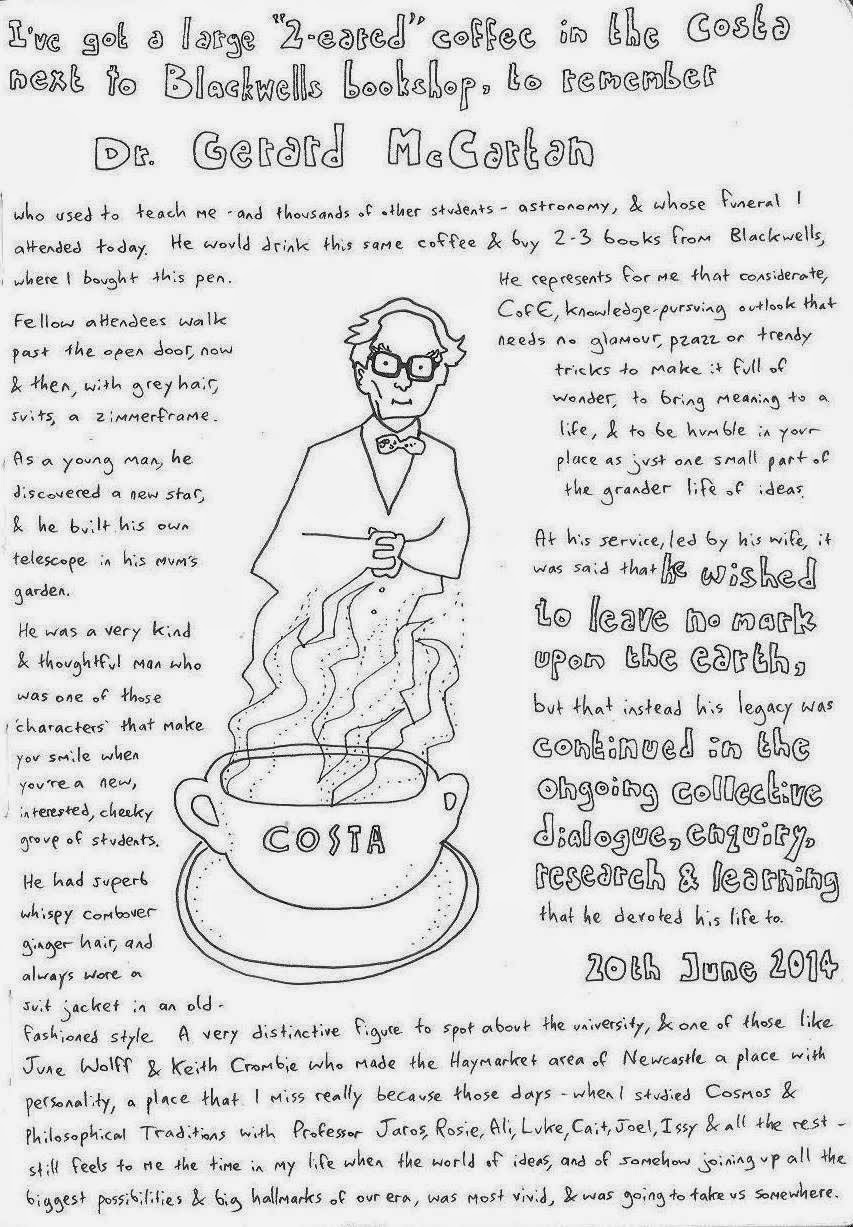 5. I also went to the Star & Shadow's Big Announcement Meeting, where I was taking minutes so only did a super-rushed sketch, and recorded the things that people said they loved about the place. 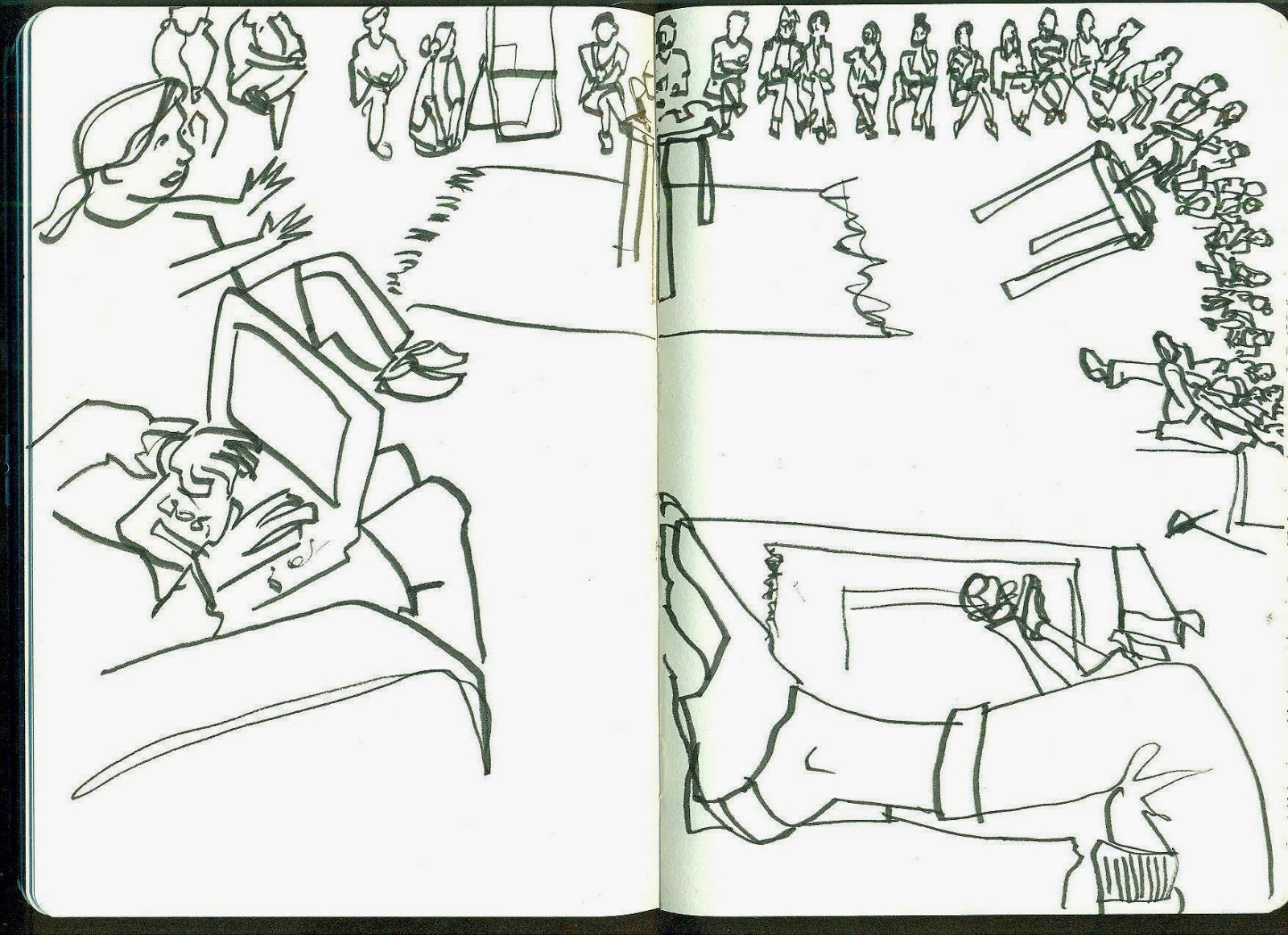 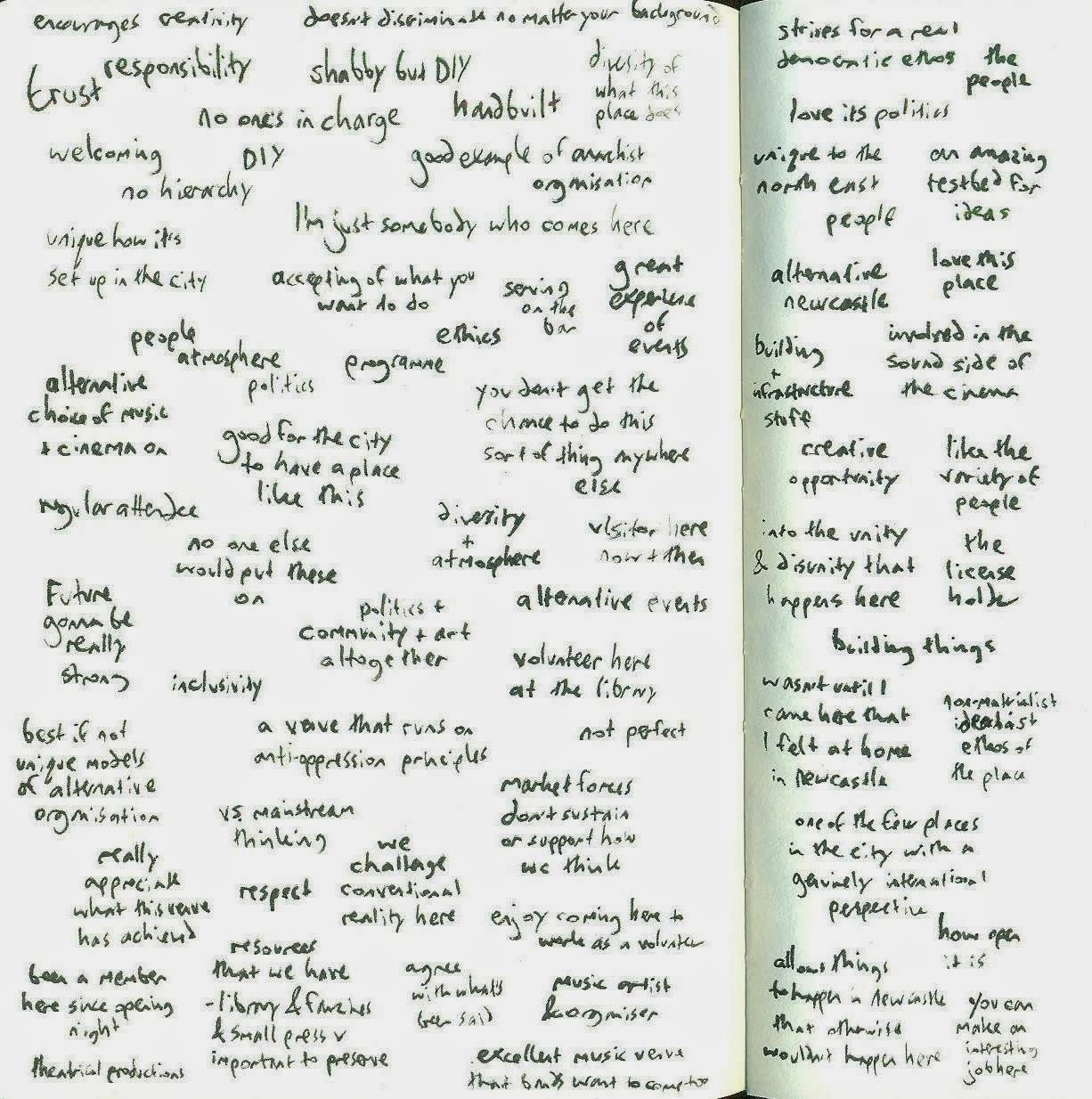 6. I went do to Leeds to see Tune-yards, very happily bumping into friends I don't see so often, and fulfilling a promise I made to myself last year when I couldn't afford to see them at the very same venue. 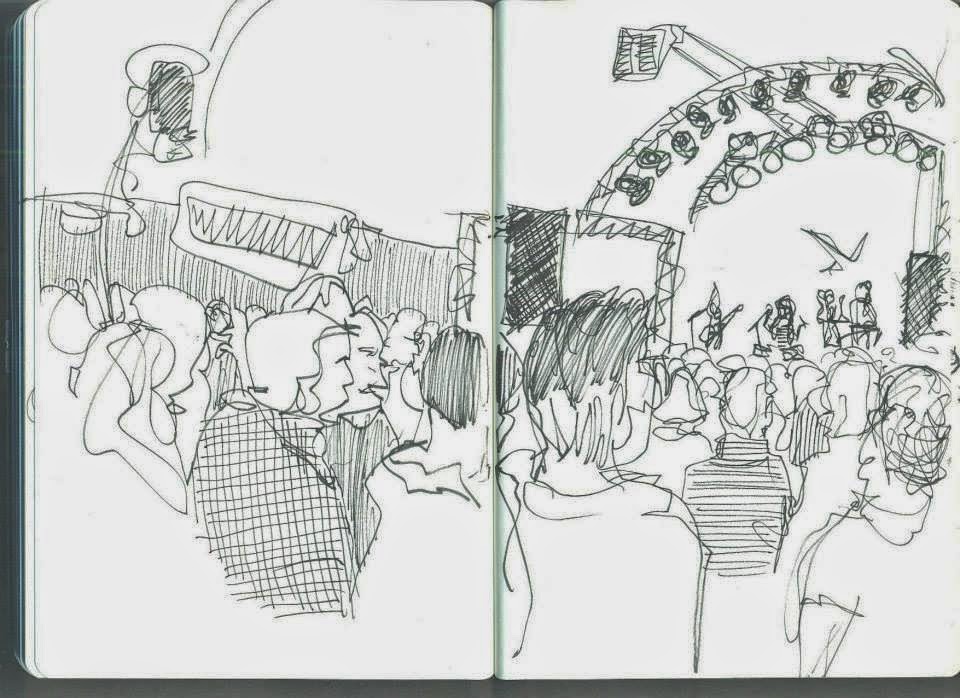 7. I drew a couple of friends in coffee shops, something I wish I did regularly for all the people I value and want to spend time with.

8. I went down to Bradford for a free gig here, and then next day for the last day of Jean McEwan's market hangout. We made a zine together, there were collections for Bradford Food Bank, and she discussed memories and images with people as they wandered in. Bradford's on the up this year. I think I preferred it last year when it was still full of nothing EXCEPT for the cool DIY stuff I went down for - this year the general commerce and hanging around drinking lager in casual fashions seems to have caught up. 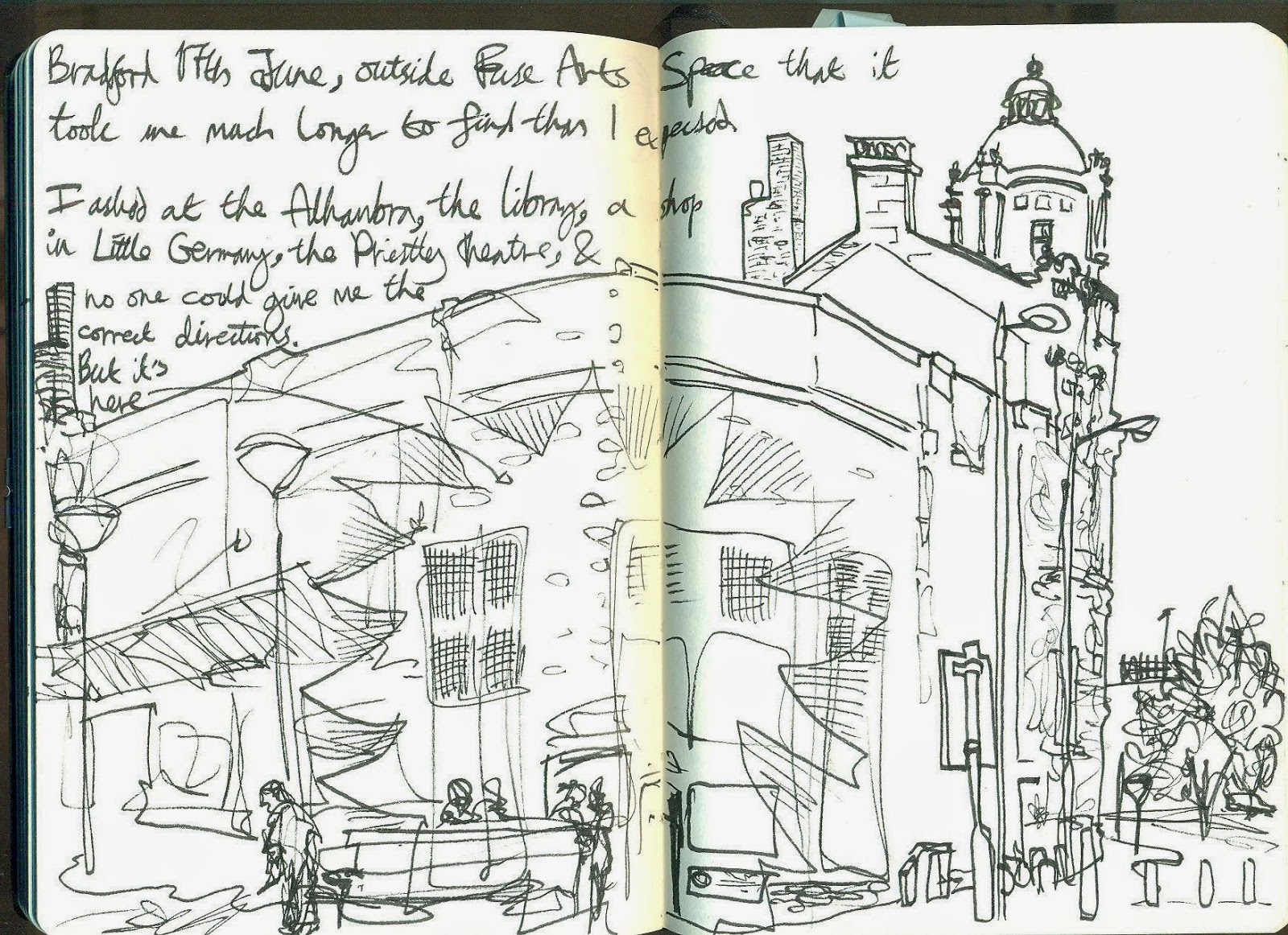 9. I went down to the British Library to hear Steve Bell & Posy Simmond talk about their cartooning. It's the kind of easy thing to access that we never get round to cos of the distance (& therefore money). But I'm glad I went, meeting an old pal Ben who doesn't look quite so much like a wonky goose in real life. The both of them looked and spoke pretty much exactly as you'd expect them to. 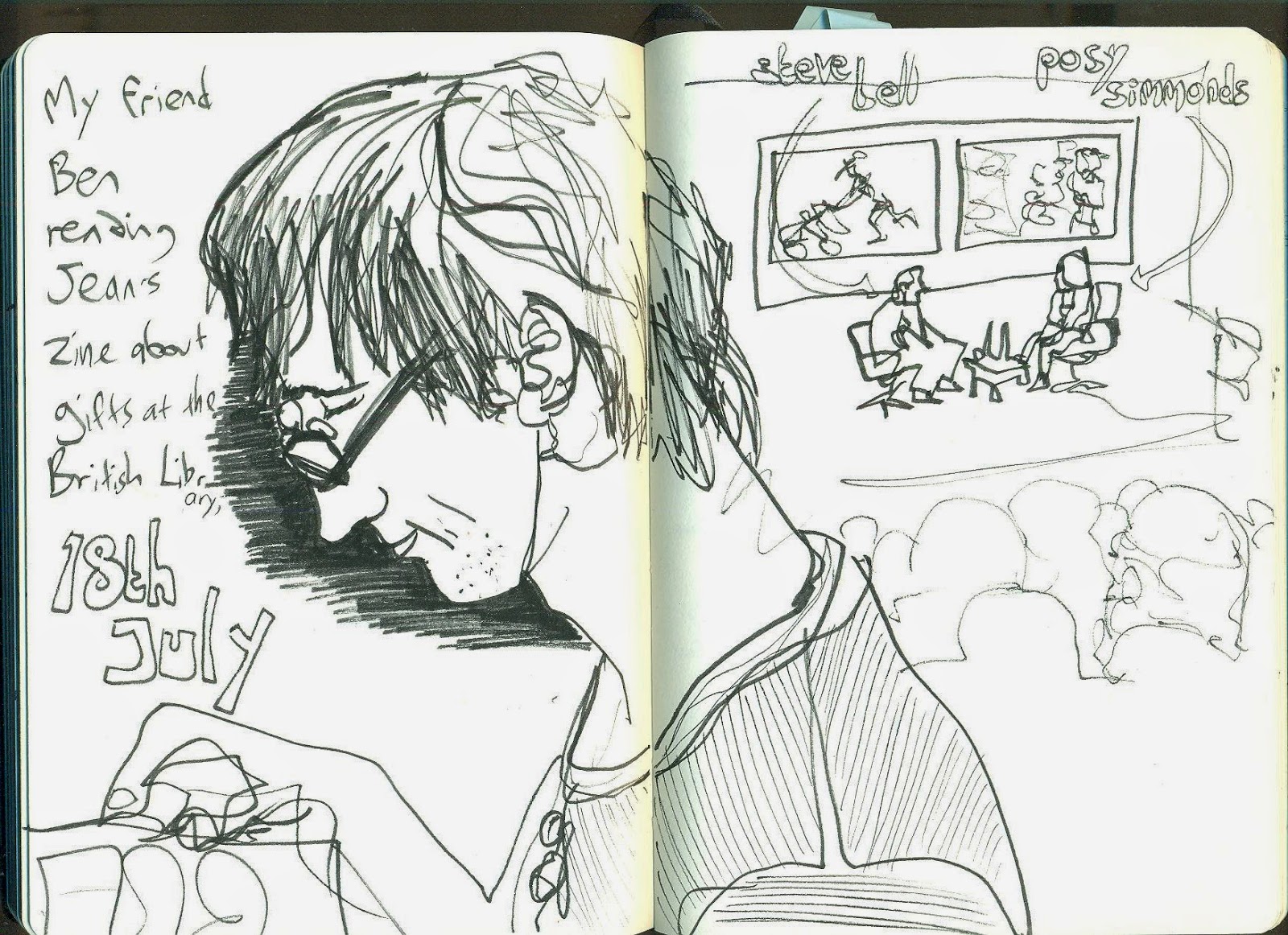 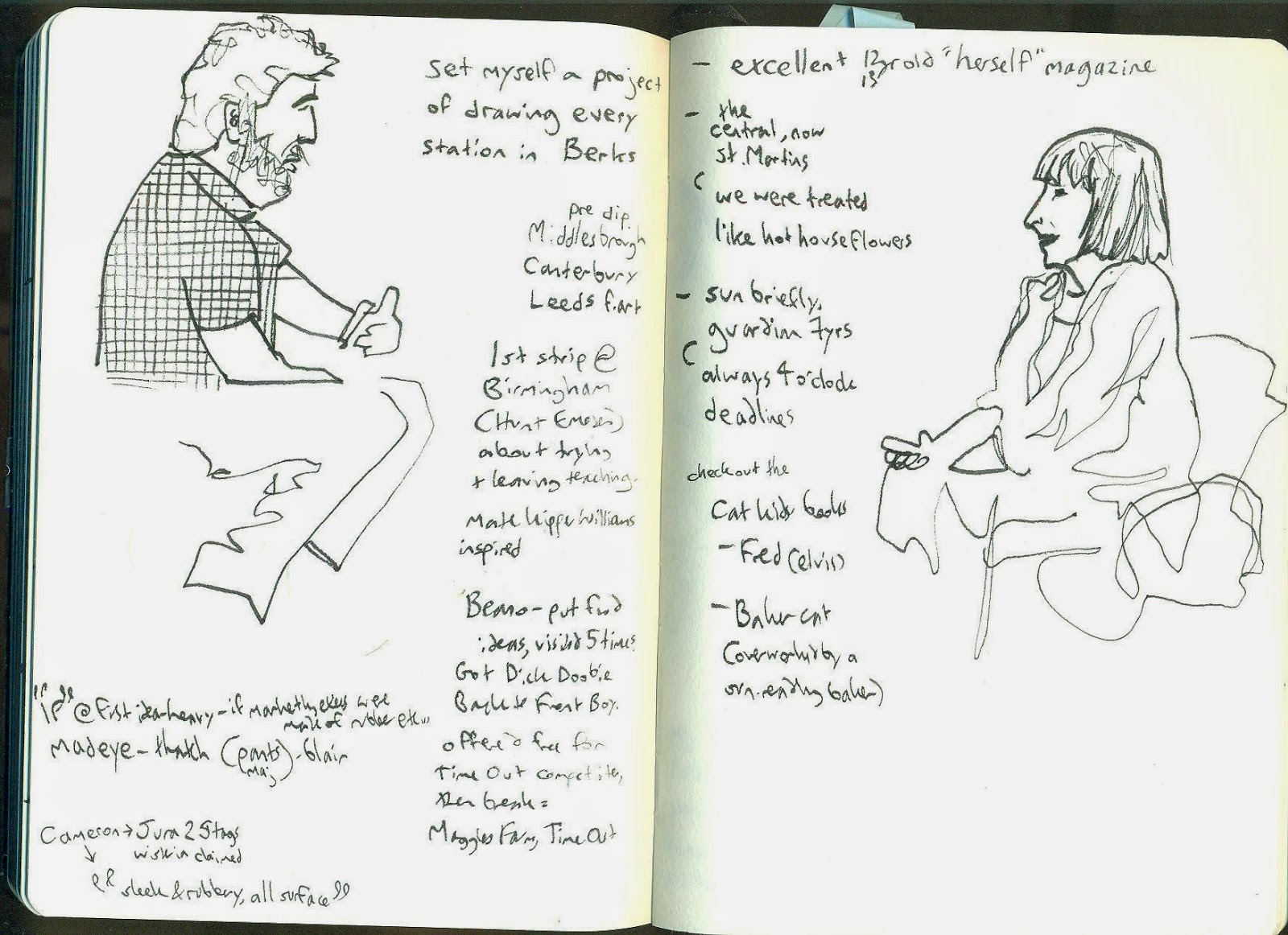 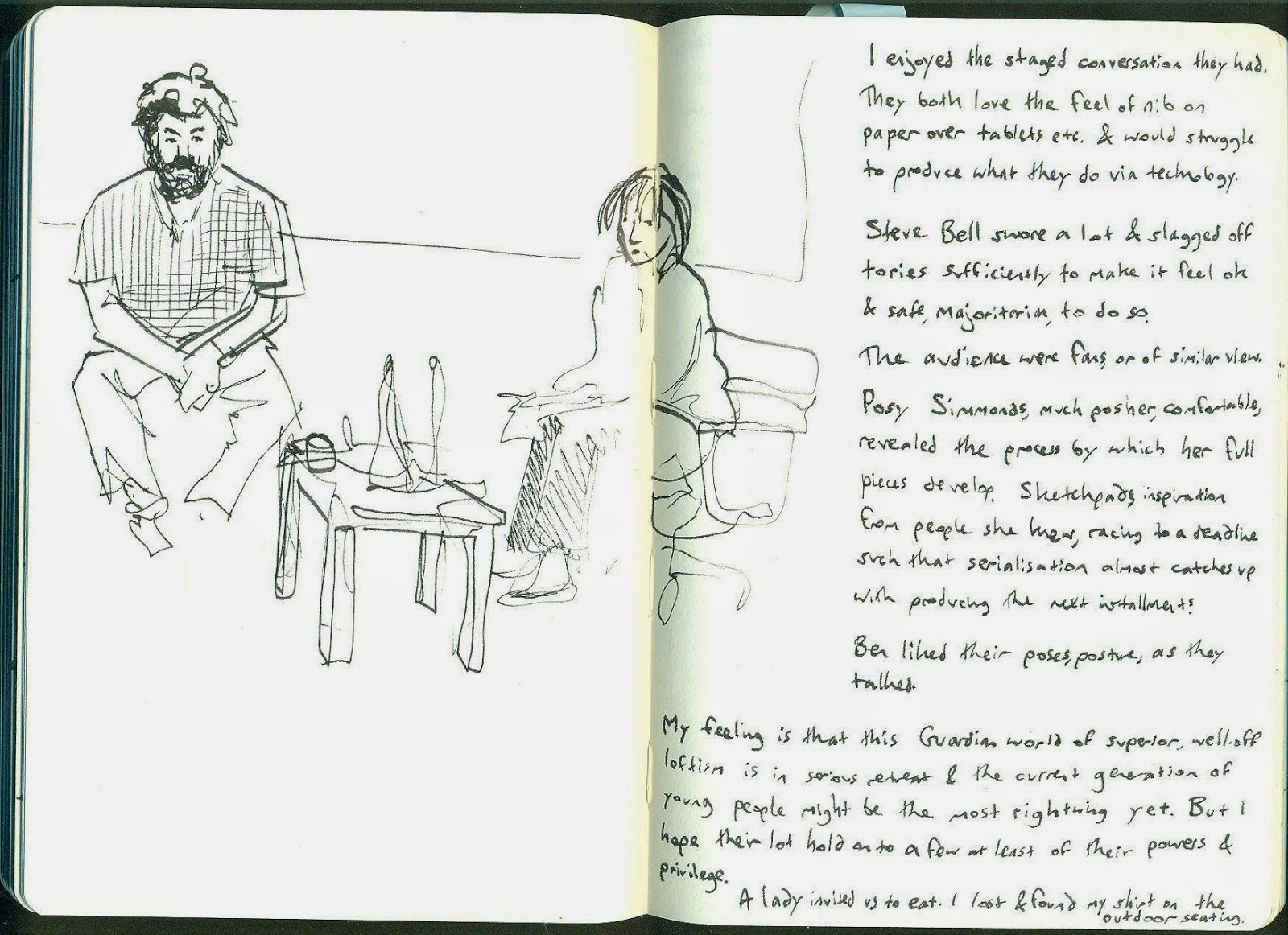 10. I went to see a gig in Durham (Erica Freas). The river Wear was full of fish and a lovely contemplative place to linger. 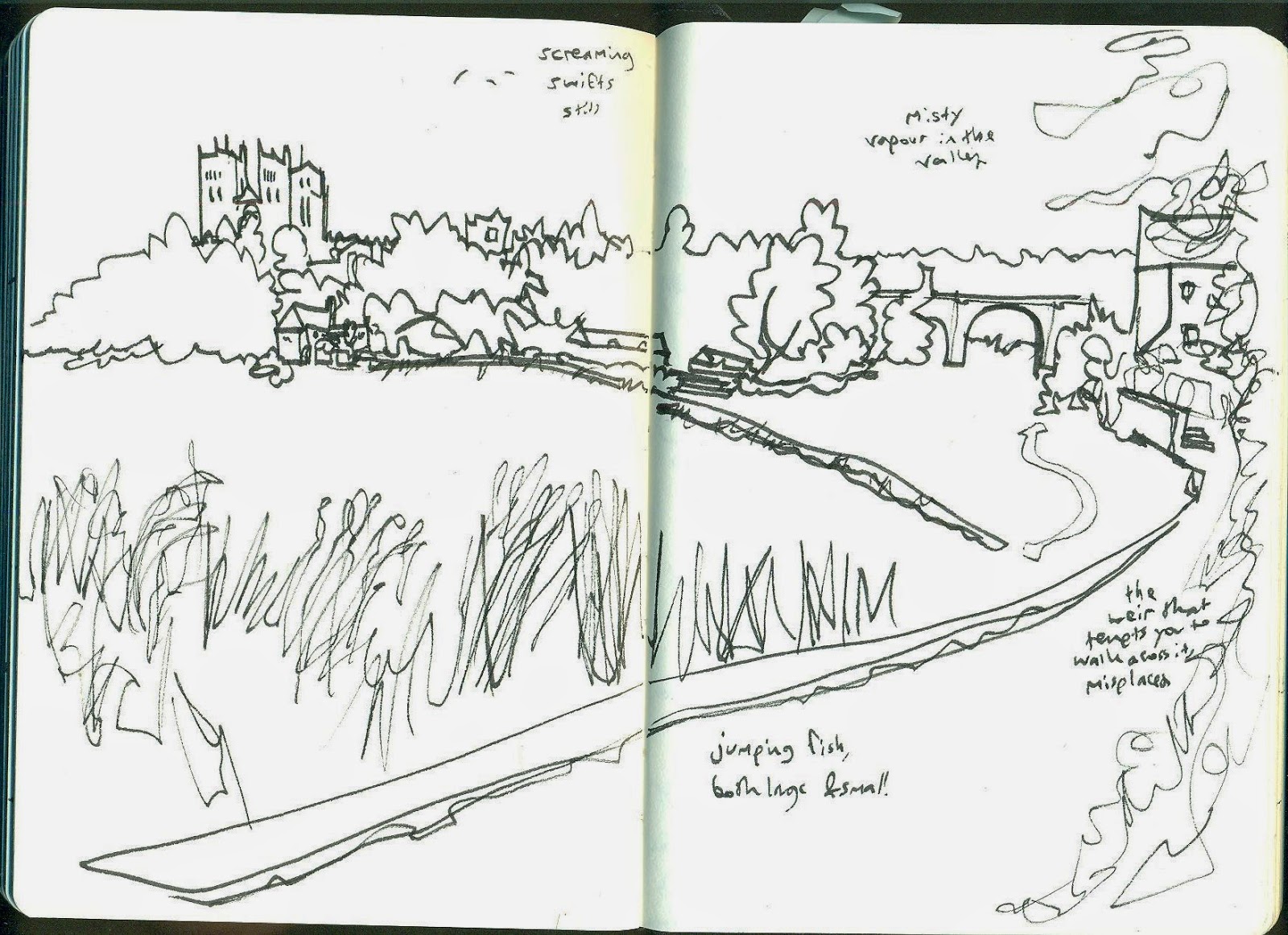 11. This is probably my most successful coffeeshop sketch, and I think that's because I let myself go across two pages, and avoided the temptation to fill in too much detail. Nigel did a picture of me in situ that will also be in the zine. 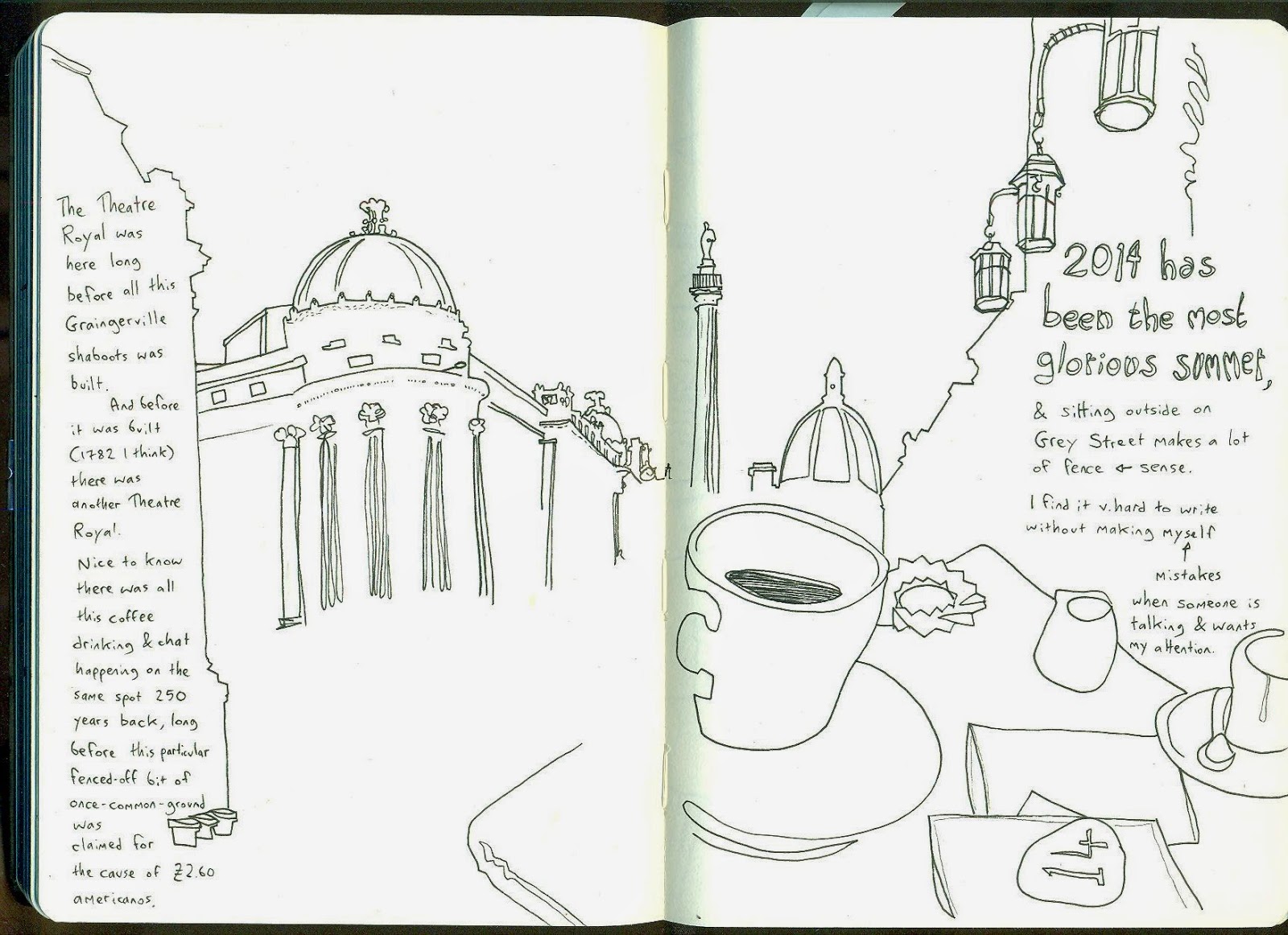 12. With the zine in mind, I popped into such hangouts as the Writers' Café and Newbridge Books, feeling uncommonly upbeat & optimistic. A little bit of our conversation at the former was recorded for a potential basicfm show. 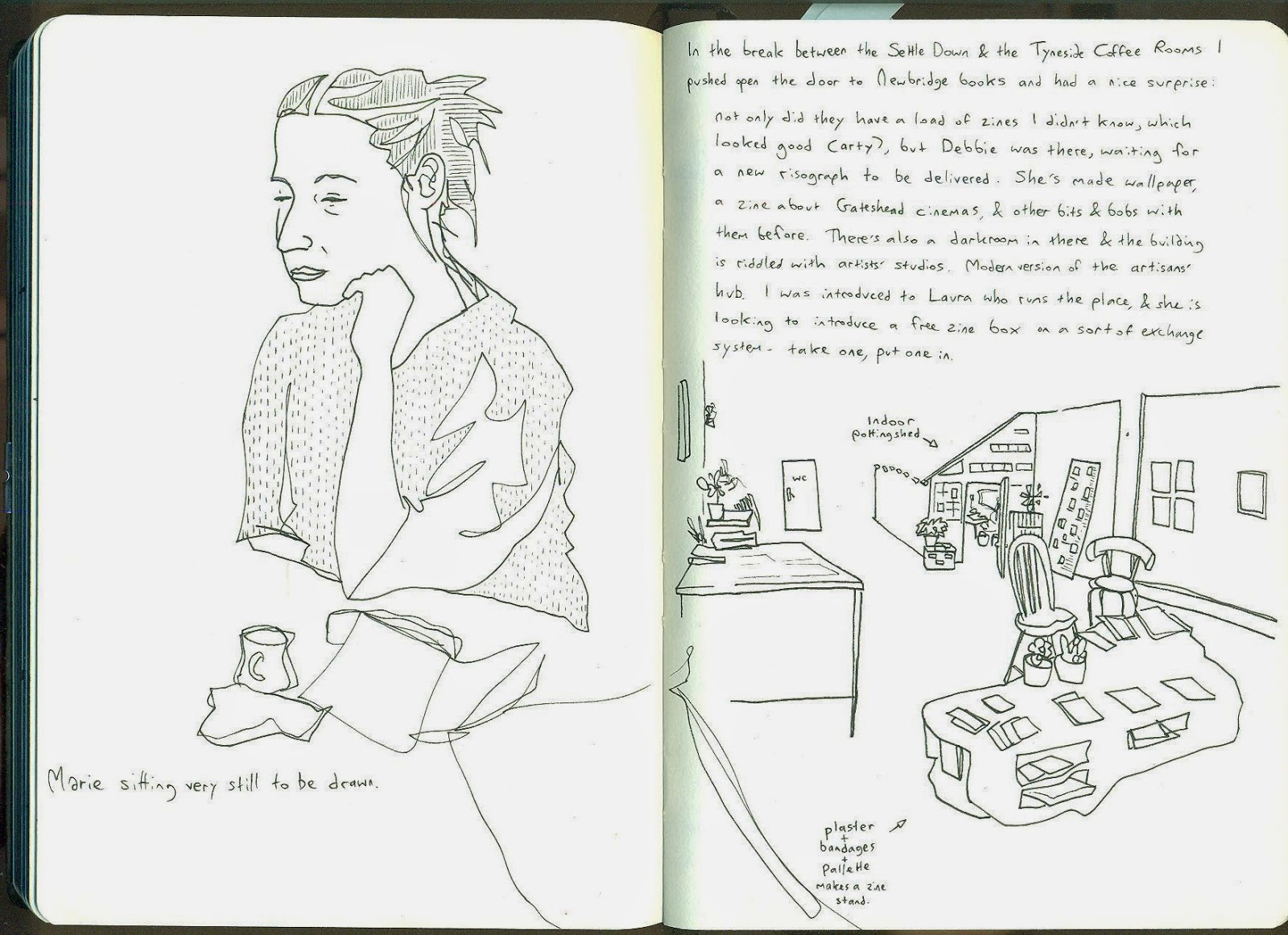 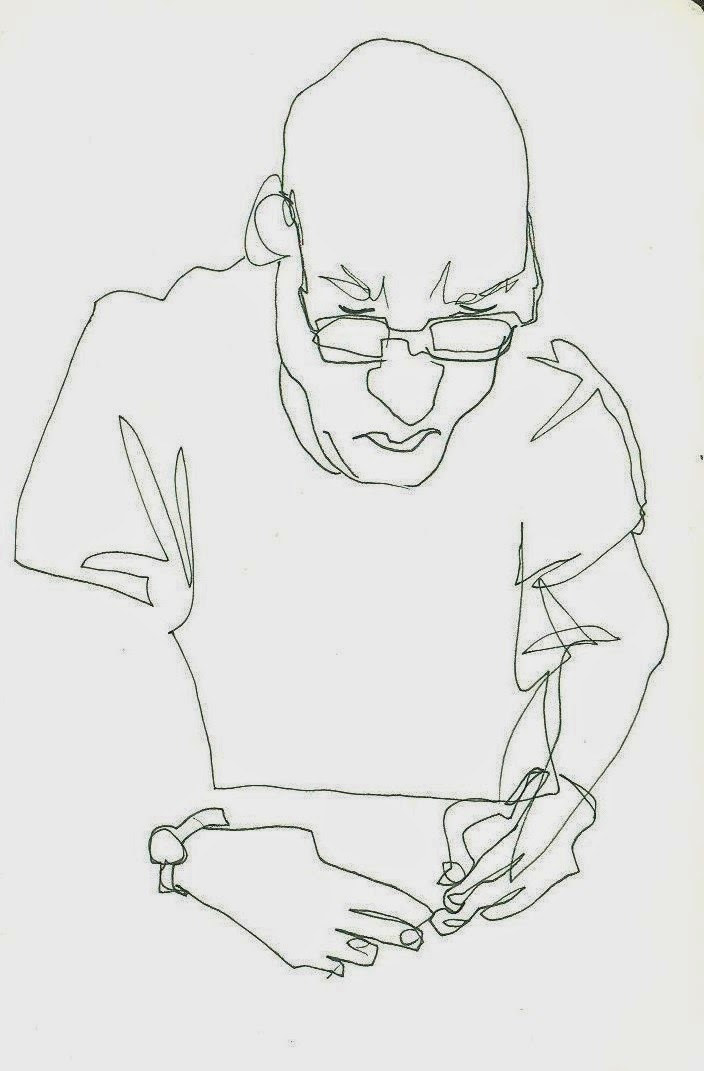 13. On the way back from another trip down to Bradford, I drew the hills and such that passed by. 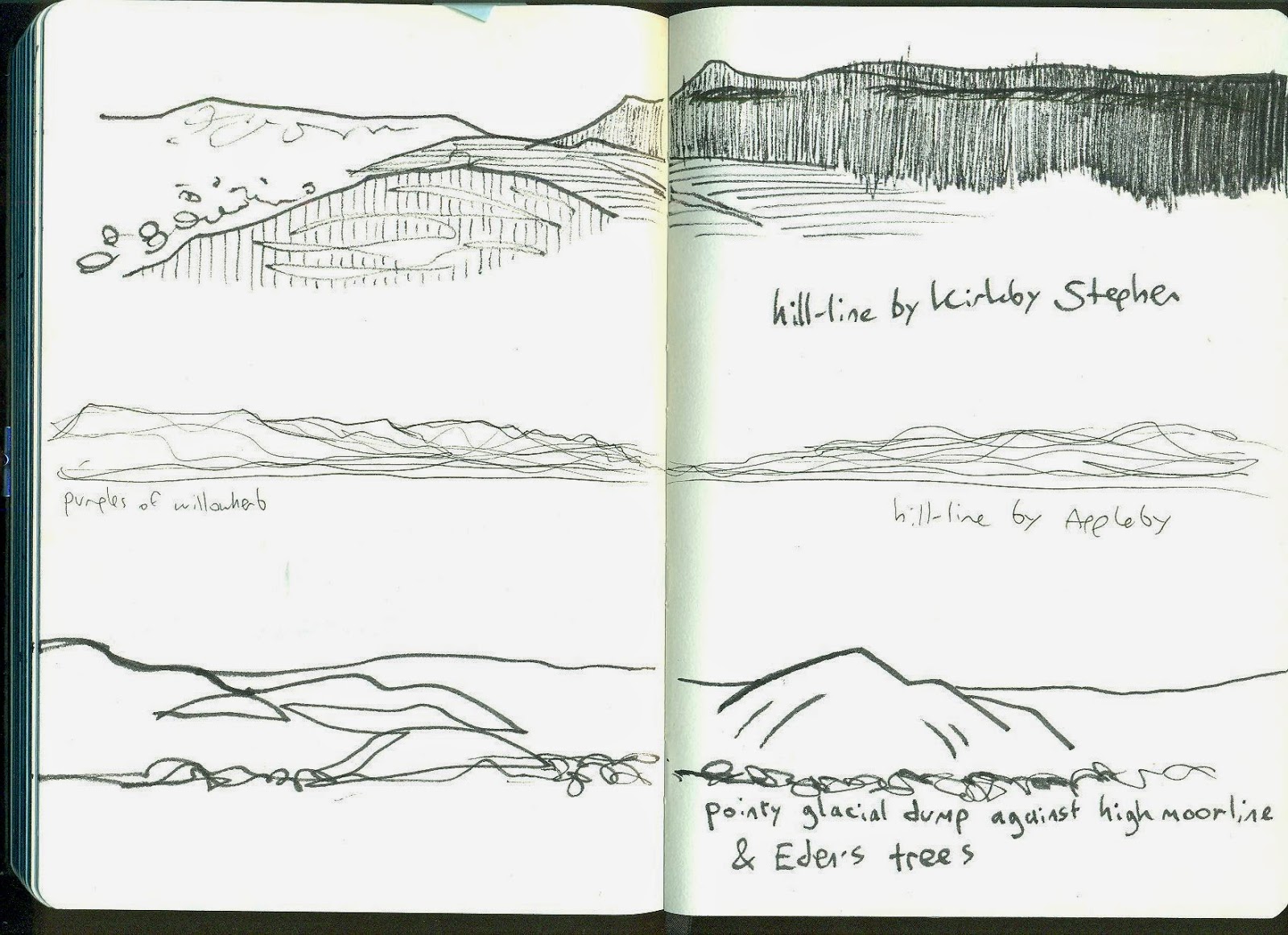 I couldn't draw this young chap's tanned leathery face - he is very much of our time, with his hip tattoos and daft quiff - because it would mean staring at his face. 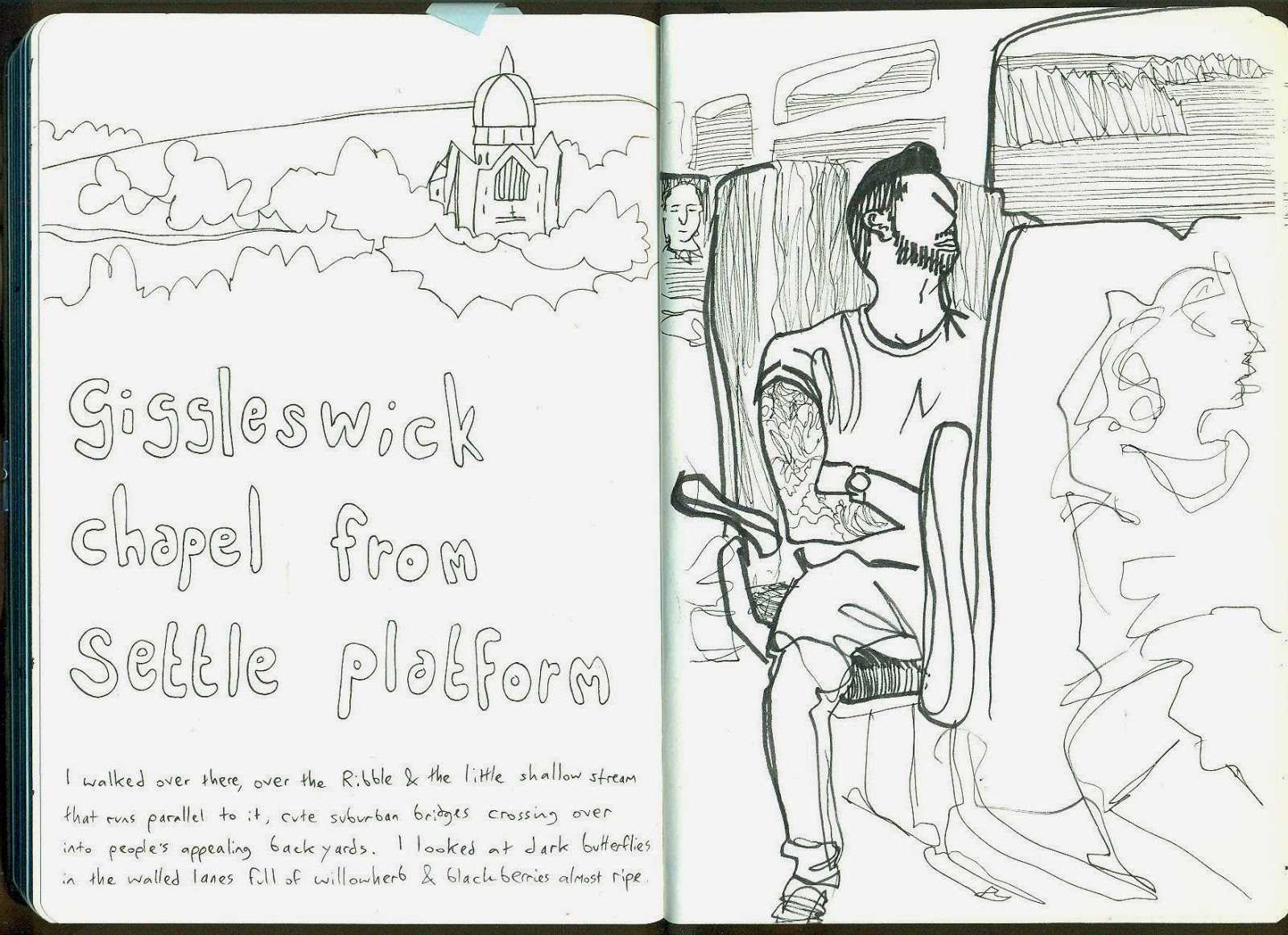 14. Bellingham has flushed out the ladies loo problem. I often scrapbook stories from the Hexham Courant, it is my favourite newspaper and handily only comes out once a week. 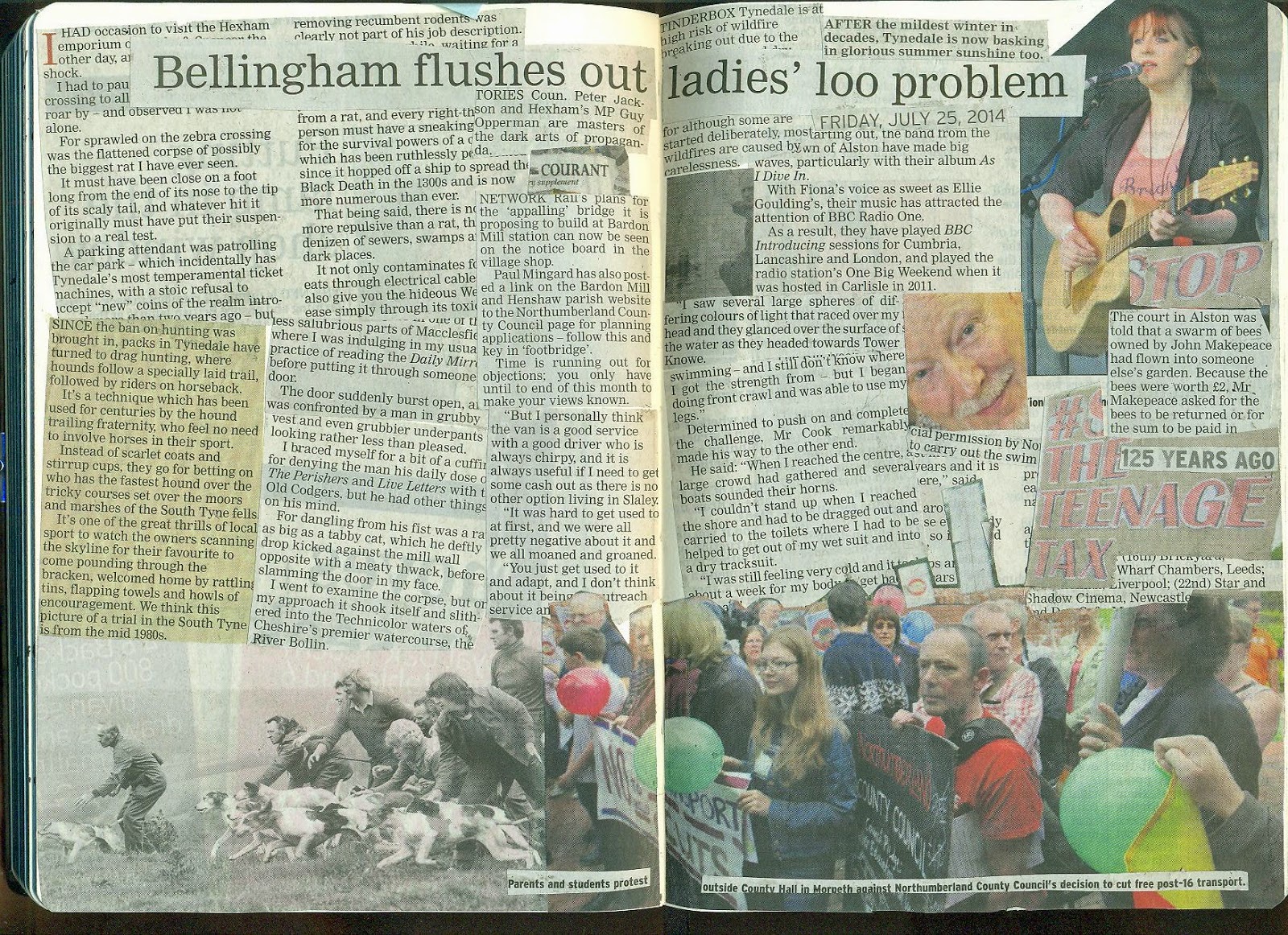 15. I went to yet another Star & Shadow AGM - I wonder if I've been to them all. It's having to move by Christmas, so I would like to do some group documentation of what's been done within that big old building. Keep yer eyes open for a callout. 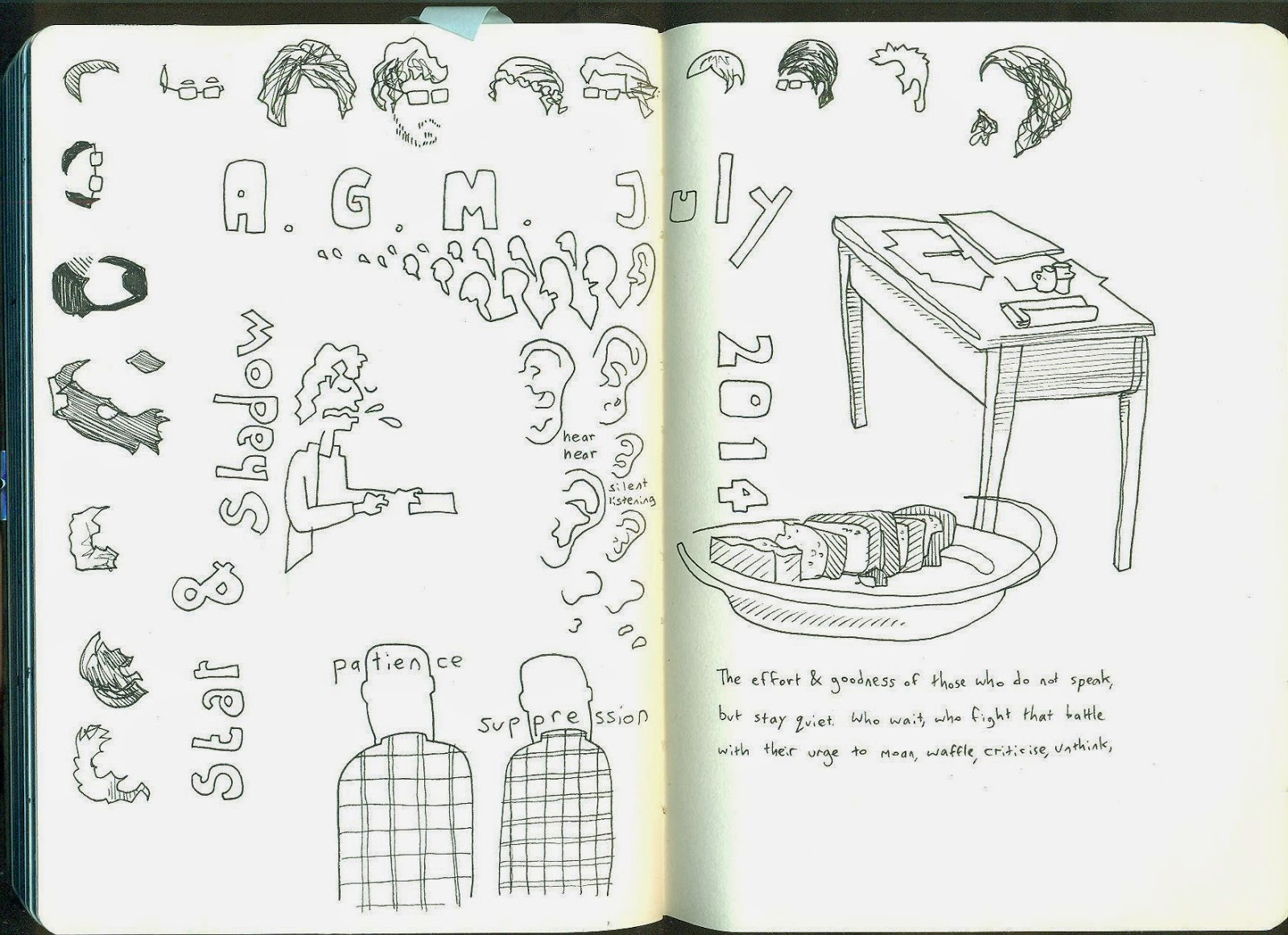 If they use this interview, they're gonna have to edit it to f**k

Some uncommonly kind people asked me to answer some questions about zines. My answers are below.


How did you first become aware of zines and how did you get involved with making/ distributing them?

I'm probably one of the last generation who still learnt about new bands through fanzines : when I was at school I picked up flyers at gigs and used to get cassettes & fanzines through the post: crusty folk/punk and shoegaze indie psychedelic stuff, along with underground comics, pamphlets, antifascist stickers. My mum worried for me!
I only started making my own zines much later, beginning by photocopying a few drawn mementoes to share with friends who I'd been on trips or at events with. Then I got hooked and started going to zine fairs, reading reviews, shelling out a bit of cash and getting to know the sheer diversity that there is out there.

Can you tell me a bit about some of the zines you've been involved with over the years?

I've drawn or written single pages for several collaborative zines that range from 'zine in a day' affairs, poems about Fenham, comic jams, film review zines, travels in Teesside, camps in Siberia, allsorts. My own ones have covered Miss Marple, Anti-establishment Roman Philosophers, the Secret Anarchist History of Newcastle, a blind cat called George, comments written by teenagers in the exam papers (which I mark for a living). I've done over 30 zines, some just a couple of dozen copies but for one I printed a thousand. Most are scrappy and done in a rush, for the love of sharing - I find it very hard to sit at home in front of a computer and take my time to do things 'properly'.

'Opinionated Geordie Monsters' saw contributors reviewing the local band scene. How did you get contributors involved and what are the positive outcomes of having multiple contributors write/draw for a zine?

I just put posters up, pestered friends and made sure the back page called for contributions, and for each of the 10 issues I got a stranger or two posting a picture of a monster and their review of the gig - simply the best mail to receive! This worked pretty well (there was no editorial policy) except for the zine's deliberate amateurishness and on-the-spot quality made a lot of my own 'reviews' rather hard to read, or not always worth the reader's attention. They were often drawn drunk, or on the bus on the way home from the gig. I had access to a very cheap photocopier with sometimes atrocious print quality, and every 3 months or so I printed 150-odd and moved on to the next edition. It was fun.

What was/ is your method of distribution? Are the venues you drop zines off at always indicative of the target audience?

I almost never charge money for my zines, because that turns something free and fun and casual into something rather too similar to work and filled with the buyer-seller guilt/manipulation of commerce. Every month or so I did the rounds of the small gig venues of Newcastle to leave a handful (the Head of Steam were especially lovely, making space for them), plus ones and twos in cafes, libraries, sometimes bus seats, sometimes phone boxes and the metro. And I made a zine box at the Star & Shadow where free zines could be dropped (& not just my own - I came across some ace Newcastle zines in that box).

Can you tell me a bit about the coffee shop zine you have in the works and the thinking behind it?

Yes I'm currently cutting & pasting some bits of books about the old coffeeshops and circulating libraries of Newcastle, from a period that really inspires me - when radical thought & scientific enquiry and new energy brought an enlightenment to Tyneside that must have been amazing to be part of. I'm mixing these in with some doodles and sketches I have made with friends in the various coffeeshops of Newcastle - that is, I've invited people to sit with me and draw a mug or a chair or a feature of the room, not aiming for high illustration but just that spontaneous 'what draws your eye' feel. I'll get as many copies printed as I can afford at the end of the month and leave a couple of copies in the places that feature. Then move on to the next idea.

Why do you think people are still mad about zines despite the existence of blogs, fan pages etc (not to mention professionally published magazines)?

I think what we see and share on the internet gets very boring very quick, and mainstream culture makes us want to kill ourselves if we let it persuade us that that is all there is. Zines are one of the very few ways that you can get a glimpse through another person's eyes, and see, feel, hold the little attempt that they've made to convey it. They're honest, personal, flawed, funny, not made for reasons of career or exploitation. They make us remember the diversity of people and possibilities that this world contains and that is such a very special thing that I treasure it more than I could say.
Posted by Michael Duckett at 11:49 No comments: